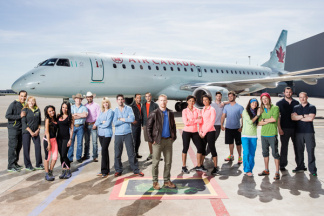 The teams had to take a bus from Lunenburg to Cape Breton, and then a ferry? Oh man. That would be a challenge in and of itself for this kid.

Hello, motion sickness! I mean, the producers of the show know that there are flights from Halifax to St. John’s, right?

Upon arriving in St. John’s, teams had to memorize a Terry Fox quote from a memorial and recite it. Jody and Cory were in first place, but they bungled the quote. It was a single sentence, and they each only had to memorize half! Pathetic. No one else had a hard time with it.

After correctly reciting the quote, the teams got screeched in. I have never been “screeched in”, thank god, although I would like to visit Newfoundland some time.

Detour: Tell a Tale or Wag a Tail

In “Tell a Tale”, teams had to go to a fishing village, listen to a story, and retell it. In “Newfoundland dialect”. No thank you. In “Wag a Tail”, teams had to deliver groceries with Newfoundland dogs. Yes yes yes yes pupppppiiiiiieeees! The route involved a super steep hill, but it still sounded easier than making out a Newfie accent.

Jody and Cory and Tim Squared both went for the grocery delivery. Jody and Cory cracked one too many eggs and got held up, but Tim Squared flew through it and completed it in first place. The brothers finished second.

When Jet and Dave arrived in St. John’s, they got into a cab with a woman who was on her fourth day on the drive. I would have gotten out right then and there. Thanks, but no thanks. It came back to haunt them later, when the sisters caught up by the time they’d arrived at the storytelling Detour.

Both teams trying to retell the story kept getting it wrong, and I didn’t even know why. I never would have attempted that challenge. The sisters ended up finishing the challenge last.

Road Block: Who needs to get their act together?

In this Road Block, one team member had to busk for money on George Street until he or she had earned $50. Tim Sr. juggled, Jody told passersby the story of how he lost his legs at war (hey, if you’ve got that card in your hand, why not play it?), Dave “sang”, and Celina hula-hooped. Dave was, by far, doing the worst. He’s too abrasive to inspire donating.

I had to laugh at how well Celina did – one dude gave her a twenty from his car! Being a beautiful woman and knowing your way around a rhythmic gymnastics ribbon really paid off in this challenge, she even beat the war vet!

Unfortunately, Jody and Cory had better directions to the pit stop and they still ended up winning the leg. I was kind of rooting for the girls, they’re such underdogs at this point. They arrived as team number two. Good for them for making it to the finals!

Tim Sr. earned his $50 before Dave did, and they arrived at the pit stop in third place. Goodbye, Jet and Dave. They had a lot of energy and were funny sometimes, but mostly annoying.

Next week is the finale! There is a man with two prosthetic legs, a man with Parkinsons, and yet Vanessa and Celina still seem like the underdogs. I won’t root for Jody and Cory because I didn’t like one of their interactions with Team Bodybreak earlier in the race. I find Tim Squared a little dull. I’m rooting for the sisters. How about you guys?