So not only is Laurence a jerk but he’s also kind of an idiot, right?

It was no surprise that Laurence was the only racer on The Amazing Race last night who chose to take advantage of the double U-Turn and set another team back. But I’m sure I’m not the only person who giggled with glee when he decided to use it on Amani and Marcus, who’d actually beat Laurence and Zac to the U-Turn and were well on their way to the pit stop. Sucker! That’s what you get for being so smug and generally unlikable!

Bicycle races are comin’ your way, so forget all your duties oh yeah

After spending the night sleeping on the beds they’d all lugged to the last pit stop, teams ended up starting this leg on even footing when they all ended up on the same bus to their next destination. While these equalizing trips can be kind of frustrating, it also made for a pretty damn exciting leg.

When the teams arrived at their destination and headed for the Roadblock, Amani and Marcus were immediately set back because of the Speed Bump they had to complete. And what a Speed Bump is was – in fact, I thought it was downright unfair. Amani and Marcus had to complete a sliding puzzle of the Malawi flag. Now, maybe some of y’all are great at those kind of puzzles and would have finished this thing quicker than I can snap my fingers, but I suck at them. I’m not sure I’ve ever even completed one. It seemed to take Amani and Marcus quite a while too, and it really set them back. I mean, I’m just saying, it looked damn harder than washing an elephant.

While Amani and Marcus were working on their Speed Bump, all the other teams were completing the Roadblock. One teammate had to use a bicycle taxi to deliver a person to a particular destination. Once they arrived they’d be paid and would have to return with the money to get their clue. It was pretty straightforward and most people finished it pretty quickly.

Malawi’s official language is English, but like many African countries there are several other regional languages spoken as well. It seemed like a lot of the teams expected to be able to communicate with people on the street and were (somewhat obnoxiously) frustrated when that was more difficult than they’d anticipated. Of course, the most ridiculous comments came courtesy of Cindy, who said that Malawi was more “primitive” than other African countries she’d traveled to and then she wondered why all the children she saw weren’t in school. Sigh. Could someone do Cindy a favor and explain what poverty is to her please? 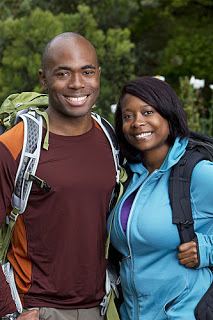 Jennifer, however, made a mistake that not only gave Amani and Marcus the chance to catch up but was so detrimental it basically ended their Amazing Race journey right there and then. Instead of taking the clue with her on the bike, Jennifer handed her clue to Justin. Then after getting paid for her trip, she couldn’t remember what to do – was there another step, or should she just return? The logical thing to do would have been to just bike back to the start. It seemed like the most likely thing to do, and if she was wrong at least she’d be able to check the clue. But Jennifer was too scared of making the wrong decision, and wasted a ton of time looking around for another team to follow or ask for help. That was a huge mistake, since everyone had pretty much finished. By the time Jennifer decided to just take her chances and return to the starting point, Marcus had completed the Roadblock. It would take a lot for Justin and Jennifer to manage to catch up – basically, it would take someone else getting U-turned.

I have to say, I was really impressed by how much Justin and Jennifer’s relationship seemed to evolve over the course of the race. They’re obviously very close, since at the beginning of the episode Justin discussed how Jennifer was the first person he’d come out of the closet to. (A touching story that was a sure sign this week would be their swan song.) But for the first few legs, these guys really bickered. Constantly. That seemed to calm down, and this week when Jennifer screwed up Justin was more concerned about her safety than their position in the race, and Jennifer completely took ownership of her error and apologized. It was nice to see.

With Justin and Jennifer at the back of the pack, all the teams moved onto the Detour, where they had to choose between “Dugout” and “Lugout”. In “Dugout”, teams had to complete a canoe race – it sounded like the easier task, but canoeing can be difficult and frustrating if you don’t know what you’re doing. In “Lugout” teams had to walk back and forth between the shore and a boat unloading cargo – including humans of varying sizes! That sounded lengthy and strenuous and not surprisingly, only one team opted for it.

Ernie and Cindy and Andy and Tommy got to the Detour first and both opted for Dugout. While the surfer dudes quickly got the knack of the canoe, Ernie and Cindy struggled until they decided to bail and use the Express Pass they’d won their first place finish in the first leg. Does that thing have an expiry date in the race? It seemed unnecessary to use it when you’re one of the two leading teams. I would have wanted to save it for a more dire situation. 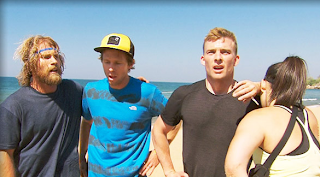 After abandoning the Detour, Ernie and Cindy couldn’t find the next location and wasted a lot of time. They still arrived at the double U-Turn first and chose not to use it, but the surfer dudes were right on their tails. There was a long jog to the Pit Stop and in the final stretch, Andy and Tommy overtook their competitors to pull out yet another first place finish. It sure was exciting, although I didn’t really know who to root for. I haven’t loved Andy and Tommy ever since their weird Christian comments about the Buddhist temple, and they’ve won an awful lot of legs. I wasn’t eager to see them rack up another one. Yet it also bugged me that Cindy begged them to let them win. Let you win? This is a race, Little Miss Perfect! Come on. You had to feel bad for Ernie and Cindy though as they were checked in second and watched Andy and Tommy win a $15,000 Discover Card for coming in first. Ouch.

You know who I’m really rooting for, against all odds? Bill and Cathi. Those guys rock. They killed the canoeing challenge and made it to the Pit Stop in third place. Impressive.

Meanwhile, everyone else struggled with their canoes. Laurence and Zac, for all their sailing experience, couldn’t get the hang of it. Jeremy and Sandy bickered and spun in circles. And while they struggled, Marcus put his big muscles and NFL work ethic to work over at “Lugout”. Here’s another team I’m rooting for. Amani and Marcus worked really hard lugging all that stuff to shore, and it paid off. They finished their Detour around the same time that Laurence and Zac completed the canoe race, and actually made it to the double U-Turn first. 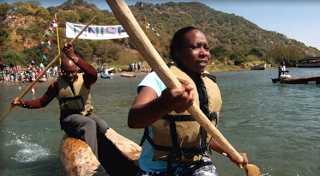 Of course, Laurence didn’t know that. He spotted two teams – Amani/Marcus and Jeremy/Sandy – behind him and decided to U-turn one. (Of course Laurence and Zac were the only team to use the U-Turn. Of. Course.) And Laurence picked the wrong team, nominating Amani and Marcus who were already well on their way to the Pit Stop. Amani and Marcus were checked in fourth, followed by Laurence and Zac in fifth and, finally completing the canoe race, Jeremy and Sandy in sixth. Poor Justin and Jennifer never stood a chance, despite using their paddling skills to make quick work of the canoe race.

What did you guys think of the episode? Were you sad to see Justin and Jennifer go? Who are you just dying to see eliminated? (Hi, Laurence!) What teams are y’all rooting for? And who’s excited for very very cute bunnies next week?!

The Amazing Race: Move Goat, Get Out The Way
https://haligonia.ca/the-amazing-race-move-goat-get-out-the-way-48152/