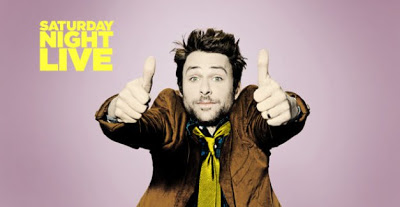 So I am not that familiar with Charlie Day. I know that he is on the show It’s Always Sunny in Philadelphia which has become quite popular, but I have never watched it. A lot of my friends always recommend me to watch but they don’t remember that I make the TV recommendations round here. (Kidding) Except for that one time a friend introduced me to The Wire. (Thanks Luke!)
The only other familiarity I have with Charlie is that he has appeared as Jason Sudeikis’ buddy in not one but two movies, Going the Distance and the recent Horrible Bosses. Both times he really just plays the same loud short guy so already my hopes are not too high for this, but let’s get started.
Opening Sketch – Gadhafi speaks from beyond the grave
Fred Armisen plays the recently deceased Muammar Gaddafi who is sending a message to the public from hell. This was kind of disturbing because it reminded me there is actual footage of this man’s death. Makes me shudder to think that. So no laughter from me.
Monologue
Wow, is this guy related to Rachel from Big Brother because he just keeps yelling. This whole monologue was very disjointed. He starts telling stories of growing up in New York, then a questionable Danny Devito shows up to remind Charlie to give up his goods then Charlie plays a piano harmonica song? My expectations are still low.
Kardashian Divorce *Must Watch*
YES! YES! Please rip into the Kardashians! I know I’m a hater, but man this family annoys me. Here are the highlights: 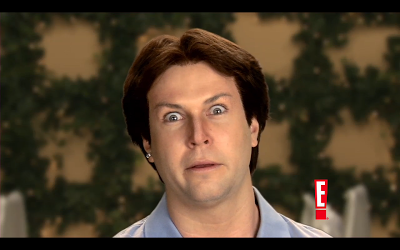 Dr. Oz
Today Dr. Oz, played by Bill Hader, shows a member of the audience what a dead rectum looks like. Let’s just say the audience member has to wear a sign that says, ‘poop’ and you fill in the rest. Bill Hader does a pretty good Dr. Oz impression. I like how Dr. Oz seems to force his audience members to do things they don’t want to do or that will embarrass them. Like that time he showed a woman how old her vagina really was. I wanted to find a clip of it but I can’t. But it happened.
Greek Gods
What if the Greek Gods tried to solve Greece’s financial crisis? Turns out there “skills” really can’t help the situation. Throughout this sketch I kept mentally answering what each God/Godess was in charge of. Yeah, I remember some facts from Grade 6. Watching this sketch reminded me how warped these stories were. Incest? Adultery? Bestiality? By Zeus’ beard. Or as he says, “By my beard!” All your old favorites are here, Apollo, Hera, Athena, Demeter, Hermes (“The worst!”) and of course the Greek God of Music Yanni. (Great appearance by Adam Levine.) 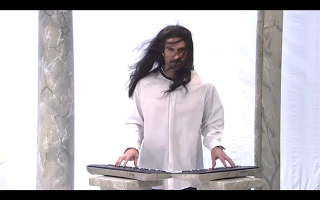 If you remember learning about Greek mythology I highly recommend you watch this. Look out for the phrase, “Now, hear me out!”
It’s Getting Freaky With Cee-Lo Green
Does Charlie even have any lines in this show? He seems to only be doing physical comedy like this weird, Freak-asaurus character. All this sketch did was give me a mental image that that Cee-Lo (a self proclaimed sexy hairless Ewok) likes to be freaky. And I don’t want to think that. But in the words of Tracy Jordon, “Freaky-deakies need love too.” The only laugh out loud part of the skit was, “Much like my arms and legs, this is stumpy.” Oh, and Bill Hader as Colonel Nasty saved it ever so slightly.
Kings of Catchphrase Comedy Part 2
My sister and I just loved this sketch when it first aired with host Zack Galifianakis. SNL presents a comedy tour made up solely of comedians whose punch lines are just catchphrases. Our favorite as usual was Bobbi’s Slappy Pappy. 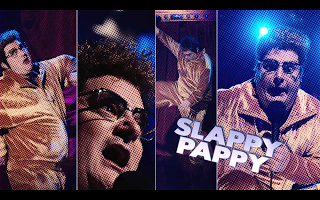 My new favorite addition is, Gavin “What if it had boobs?” Speiller. The least funny? You guessed it, Charlie Day. I highly recommend you watch this. And if you don’t “get it” that’s your own FAULT.
Weekend Update
Seth seemed extra chipper in this week’s Update and it had some good moments.
His first guest was Rick Perry played by Bill Hader. Have you seen Perry’s speech he made in New Hampshire? Something wasn’t right about that. Bill did an amazing job trying to recreate this manic speech. He was so good that even Seth started to laugh. But I think it was mostly prompted by Bill’s mistake of making the tiny hula girl say, “ola!” instead of “aloha!” People often say that acting drunk is some of the hardest acting and Bill nailed it here. “Seth, I am just so bad at talking.”
Seth’s other guest was Judy Grimes. I thought this character died with Penelope and Gilly but here she is.
Joke of the night:
On the woman who is claiming Justin Bieber fathered her child: “Most babies do look like Justin Bieber.”
Dolphin Tale
I am thinking who ever wrote this recently went to Sea World or something. Like the monologue, this sketch seemed really disjointed. But maybe I should appreciate a sketch that wasn’t so predictable. I don’t know. It was just weird.
Crime Scene
A police team arrives at a crime scene. While watching this I start writing, “This set looks just like the Seinfeld apartment,” at the exact same moment Jason’s character states the same thing. Phew! I wasn’t going crazy. Charlie Day yells his way through the sketch as a Chief Detective who isn’t familiar with Seinfeld because he doesn’t own a TV. Oh, and he also isn’t familiar with baseball or WWII history. Charlie was so hyper that I could understand what he was saying. The premise of the skit was funny but the execution was poor. It was the last sketch of the night so maybe the actors just wanted to finish. Whatever.
So again, Charlie Day, not a fan. However I felt this was a great episode for the cast working together. The Kardashian parody and Kings of Comedy were great examples of how cohesive the cast has become.
Can’t wait for Jason Segel on November 19th!
Here’s how I would rank the sketches: