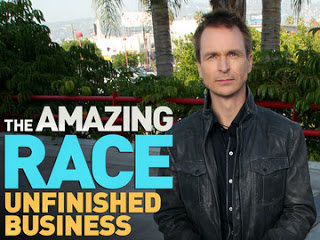 Phew! That was close, wasn’t it? After coming out on the wrong end of a Detour gone bad, Gary and Mallory ended up in last place this week on The Amazing Race. Since they’re one of my two favorite teams I was begging the reality TV show gods to make it a non-elimination week, and they came through for me! (Take note, Matt from Survivor. “God” has more important things to do than watch television. The reality TV show gods are totes the ones you need to be campaigning to.)

All the teams seemed pretty relieved to leave India and head to the land of Arnold Schwarzenegger, Sigmund Freud and the von Trapp children. “We’re done playing cowboys and Indians,” one of the cowboys quipped. Almost everyone chose to hop on a flight that would arrive in Austria around 5:30 a.m., but the cowboys took a risk and booked one landing about half an hour later. It had one connection instead of two, and they hoped all the other teams would get caught up with a delay. It was a valid strategy, but not one that came through for them. They landed half an hour after everyone else and once again spent the leg playing catch up.

The first thing the teams had to do in Austria was participate in some product placement, now a staple on The Amazing Race and pretty much every other TV show these days, scripted or otherwise. Yeah, it’s awkward to hear Phil rattle off all the great aspects of a 2012 Ford Focus, but CBS has to pay for his eyebrow grooming somehow, right?

To get their first clue, teams had to back up in a parking lot and read “Schloss Schallaburg” in the built-in camera doohickey in the car. Gary and Mallory weren’t lined up correctly or something, and their struggles put them behind everyone else from their flight.

Schloss Schallaburg was a very pretty castle, where all the teams would get a clue from “the chick from Harry Potter“, as Justin said. I thought Zev would be relieved to escape the heat, noise and crowds of India, but it turns out he’s a bit hard to please. Soon after arriving in Austria he complained “Oh goodness, I don’t like the cold weather.” Not much of a traveler, that boy.

Kisha and Jen, Justin and Zev and Gary and Mallory all decided to try and eat the meal. First went Kisha and Jen, and they failed. Then Justin and Zev (who quipped “I wanna talk to the manager” when he couldn’t finish in time) failed too, heading for the other Roadblock option just as Gary and Mallory arrived. The thing about this Roadblock was that you really only had one shot at it. If you can’t finish the meal in time, a second attempt would be pointless. You’re not going to down a whole other meal faster after almost finishing the first one.

Gary and Mallory gave it their best shot – Mallory joked “I’m not taking these calories home for nothing!” but they just couldn’t do it. Gary thought he’d be able to eat all of his meal and some of Mallory’s too in the allotted time, but it was too difficult. Poor Mallory, bless her heart, offered “I can throw up and try again, Dad!” That wouldn’t have worked, but you’ve got to admit the girl is a champ. I’m not even sure that big guys like the Globetrotters or the Cowboys would have been able to succeed. Do people test these challenges out in advance?

With the  “Quick and Easy Meal” Roadblock turning out to be a disaster, everyone had to carry the couches – and that meant the people who’d originally chosen that Roadblock had a major lead.

Flight Time and Big Easy were making me laugh all over the place this week. From Flight Time’s kinda gross but kinda funny public urination (hey, Krisha and Jen probably told them their horror story and he knew he had to do his business as fast as possible) to his musings on Freud. He commented that “He must have enjoyed couches” and “I don’t know nothin’ about the couch. Maybe he was doing his philosophical thing, laying on the couch, and having his weird Freudian slips.” Flight Time later explained to Big Easy that “He’s the dude who used to have dreams about sleeping with his mama and all that kind of crap.” Actually, I took philosophy in school and I don’t know if I could have done a much better job. But, you know, I was always more of a Descartes girl. Limited philosophical knowledge didn’t hold them back, though, because the Trotters finished the task first.

Despite Kent’s incessant whining and Vyxsin’s incessant moaning for him to stop whining, the “dating” goths (seriously, does anyone else not really buy that they’re in a relationship?) finished the Roadblock second, followed closely by Kisha and Jen. Justin and Zev made up pretty good time, but the Cowboys overtook them within the university since poor Justin andZev dragged their couch up three extra flights of stairs thanks to some lousy directions. Once the Cowboys had made up the time they’d lost with their flight, I knew Gary and Mallory would be in trouble.

The Detour was pretty simple – one team member had to dress like a chimney sweep and follow the real deal up onto a rooftop to clean three chimneys. Big Easy finished the task in a flash, even though he grew up in a house without a chimney and Santa always had to come through the window. But he and Flight Time missed their turn for the pit stop, the von Trapp house, and Justin and Zev overtook them. I love the Globetrotters, but I like Justin and Zev too and they can probably use the first place prize more. They each won a Ford Focus, and I’m guessing Globetrotters get paid well enough to buy whatever car they want.

(Sidenote: I saw the Harlem Globetrotters last week for the second time in about a year, and they were delightful. Flight Time and Big Easy weren’t there, though – come on guys, why won’t you come to Halifax?)

Kent and Vyxsin, unfortunately, managed to come in third. I was hoping all their fighting over directions and when to warn someone that they need to turn would get them lost, and thus eliminated. Their relationship is so bizarre – Vyxsin screams things like “I cannot deal with your frickin’ psycho behavior! If we get eliminated today, I swear to God, I’m never going to speak to you again!” and Kent just sits there in silence. He’s not innocent either, though, since I believe at the start of the leg he threatened to step on Vyxsin’s face. An empty threat if I’ve ever heard one, since Kent is about half Vyxsin’s size. Apparently third place was an all-time best for the goths, which is not particularly impressive. At this point, I really want to see them eliminated. I can’t stand their bickering and I don’t think they’re nearly as likable or competent as the other teams.

Kisha and Jen came in fourth, with the Cowboys right on their heels in fifth place. I know a lot of people love the cowboys, and they have their funny moments (Jet saying “I could lay on the couch, tell Cord about my feelings, and he could push me,” and Cord replying “I don’t need to know about his feelings that bad.”) but after the goths, I’d like to see them eliminated. I find they scrape through by the skins of their teeth a lot, and I like the other four teams better.

Poor Gary and Mallory never really had a chance to catch up after that unfortunate Roadblock, but I am SO glad it was a non-elimination legs. I know if it had saved a team like Kent and Vyxsin I’d be moaning, but Gary and Mallory are one of my two favorite teams left, I think they’re strong and funny and have an awesome rapport, and I’m glad they get another chance. As Mallory said, third time is the charm!

What did you think of the episode? Were you glad Gary and Mallory got saved? Did you notice that Phil didn’t do the voiceover in the scenes from next week? What was up with that?

The Amazing Race: The Hills Are Alive...With The Sound Of Whining
https://haligonia.ca/the-amazing-race-the-hills-are-alivewith-the-sound-of-whining-36597/