Home / Life / Couchtime With Jill / The Amazing Race – The Pacific 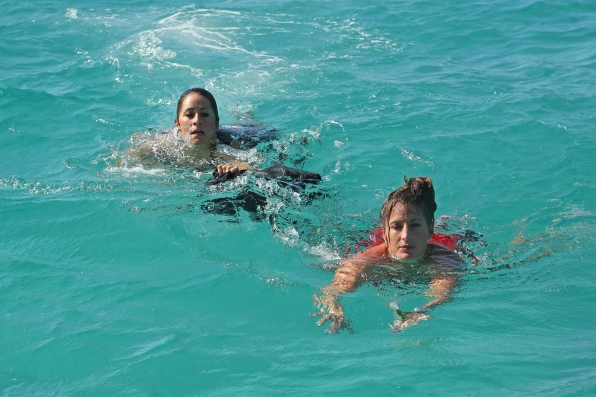 The Amazing Race – The Pacific

I watched The Amazing Race late on Monday due to the Academy Awards (which was a snoozefest) but I’m all caught up and ready to recap! Click on through.

The teams were in Bora Bora this week, which is basically the most beautiful place on Earth. There was some chatter about the Express Pass that Jessica and John won last week, with most teams loudly declaring that they wouldn’t “suck up” to try and get it, then doing so.

Detour: Pick a Pearl or Take a Trunk

Teams had to choose between finding two red pearls in strings of oysters, or setting up an underwater picnic. The choice seemed clear – oysters were chance, and the trunk was teamwork. I’d have gone for the latter option, but many teams moved through the oysters challenge pretty quickly. Team YouTube finished first, with Team J&J right behind him. The father and son team and the hockey bros were also fast.

Idries and Jamil weren’t one of those teams, as they spent a lot of time on the boat discussing whether they should switch challenges. It appears that water ain’t their jam. Winnie and Pam also struggled, mostly because they’re both “dramatic” and “afraid of the ocean”.

Meanwhile, the roller derby moms seemed to be pretty great at working together to set up their underwater picnic – it was adorable, really.

For the Roadblock, one teammate had to walk on stilts and kick a coconut for 35 yards. Many teams finished at once, resulting in a footrace to the pit stop. The hockey bros grabbed first place, the father/son in second place, and Team J&J in third place. In the mad dash, David (the dad) tripped and hurt himself. Declaring that you’ve “ruptured your achilles” feels like a statement I’d wait for a doctor to make.

There was a second mad dash to the mat, ending in Team YouTube grabbing fourth place and the hillbillies in fifth. The roller derby moms came in sixth place.

Back of the Pack

The worst teams from last week were a couple hours behind the rest of the teams. The country gals and Max and Katie went for the underwater picnic, and finished pretty close to one another. But the twin doctors were still struggling with the oysters when they finished, and Pam and Winnie had gotten lost on the jet ski. When Idries and Jamil switched challenges, I knew they were dunzo. They should have switched hours ago.

Pam and Winnie had a difficult time with the stilts, which gave the country singing blonds the chance to advance. They finished in seventh place, pretty good for where they started. Winnie (or Pam? I never know names.) spent too much time whining over a blister, which allowed Max to finish ahead of them as well. He and Katie came in eighth place. They finally got it, but the twins had done so poorly that they still finished in ninth place.

Idries and Jamil arrived later and were eliminated. It’s too bad, but they made a bad choice in sticking with the Detour for so long when they were such weak swimmers. Next week, poor David finds out that he did tear a muscle and the teams head to New Zealand. These have been two good episodes, hopefully this season keeps it up!