…they’re in and they’re out, they’re up and they’re down. The tides changed on The Amazing Race this week faster than Elmo could say “Katy Perry”. The teams went from the scorching heat of Ghana to the icy climate of Sweden, and Team Glee went from the top spot to being eliminated on their graduation day.
Teams left the pit stop in Ghana and immediately headed for the airport, where they could use plane tickets already provided to them or try to find a quicker way to get to Sweden. Some teams managed to get a flight that would arrive two hours earlier, including Michael and Kevin, who’d have to complete a Speed Bump when they arrived. There was an awful lot of sharing of information going on for this stage in the race. Kevin discovered the early flight, but at least after he told Gary and Mallory they were able to use Mallory’s good looks and charm to sweet talk an airport employee into getting them booked on to the flight. But Nat and Kat didn’t have any reason to share their info with Brook and Claire other than girl power and good karma. How very Sisterhood of the Traveling Pants. At some point, that will have to end.
Ice Ice Baby 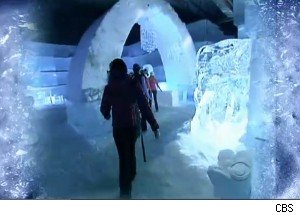 Once in Sweden, teams visited an ice hotel where they had to decipher some directions etched into a block of ice. It was here that Michael and Kevin had to face their Speed Bump, but luckily it was just uncomfortable, not difficult. They had to sit on chairs of ice for ten minutes – not as relaxing as it sounds, considering Kevin was wearing soccer shorts. Didn’t it occur to them to change on the plane? The ten minutes they spent chilling (Get it? Get it? Ha!) in the ice castle was inconsequential, since they ended up actually beating the other teams to the next task.
The Roadblock required one team member to ride a dog sled around a course and retrieve five colored flags. It was pretty funny to watch Michael complete the task, he was having such a good time! It wasn’t a difficult task, though – even though Mallory missed her first flag, it didn’t seem to take her long to go back and get it. Oh, and there was a fake bear at one point, which was pretty bizarre. Was it meant to distract? Did it? After the Roadblock the teams were still solidly divided into to groups – the early flight and the later flight.
Dashing through the snow
The Detour was the real challenge this week. Teams had a choice between “Sleds” and “Beds”. In the first task, both team members would have to complete a sledding course in under one minute and 58 seconds. In the second task, the teams had to assemble a traditional tent that looked a bit like a teepee. Michael and Kevin smartly chose to go for the tent – I can’t picture Michael doing the sledding, he would have broken a hip!
The problem with the sledding seemed to be that people either had a talent for it, or they didn’t. It only took Nat and Kat and Gary and Mallory a couple of tries before they completed it in time. Kat took a pretty bad spill over the side of the mesh fence – if it had been a video game, her screen would have gone black. Poor Mallory was right on the 1:58 mark on her first try, so she had to go again as well. Brook and Claire did pretty well also. The three teams, all on the earlier flight, came in first (Nat and Kat), second (Gary and Mallory) and third (Brook and Claire). Michael and Kevin were a bit slower with the tent, but they still came in fourth – a big improvement from last week.
All the teams from the second flight were trying to do the sledding with varying degrees of success. But Jill and Thomas, who fell far behind after getting lost a few times, decided to use their express pass after briefly checking out the tents. I thought it was the right decision – they knew they were in last place, and had no idea whether the other teams would be struggling to finish the Detour or not. It’s too bad they had to use the Express Pass so early, but that’s better that getting eliminated with it still in your fanny pack. They made it to the pit stop in fifth place. The Hairstylists and Their Jerk Boyfriends are not rocking this season so far.
Nick and Vicki zipped through the sledding because they’re used to driving motorcycles and stuff. I’m sure it totally shocked you as well when Vicki said “We’re more a physical team than a mental one.” What? I totally had them pegged as Mensa members.
The Back-Up Plan
The final three teams, Chad and Stephanie, Team Glee, and Team Volleyball, all struggled with the sledding. Stephanie tried it once, was both terrified and awful, and begged Chad to switch tasks. He was a jerk about it, but they switched. Just as they were finishing up their tent, Team Volleyball switched as well. I can’t really tell them apart, but one girl’s sled looked as though it zipped away from her and skidded into the depths of a crevice or something. I would have been pretty freaked out by that (In fact, I would have been all “What if I’d been ON that sled? I have had a brush with DEATH! I could have fallen RIGHT OFF the side of this mountain!”) but instead Volleygirl just shrugged and said “I guess we’re doing the other detour.”  I had Team Volleyball pegged as a team to watch, and while they’re pretty likable and throw out a lot of offhand one-liners, it doesn’t seem like they’ve brought their A-game yet. Are they doomed to remain at the back of the pack? Or is there still time for them to surprise us?
Team Glee followed the other teams over to the tents after Jonathan tried and failed many, many times at the sledding. It’s been obvious throughout the race that Connor is the stronger team member, and they really should have quit the sledding sooner. It was obvious Harry Potter couldn’t stay on his sled for more than 5 seconds without falling off. Perhaps he would have had better luck on a broomstick.
Chad and Stephanie were my least favorite team of the three left and I would have preferred to see them go, but since they only tried the sledding once they had a huge lead. They made it to the pit stop in seventh place, and it came down to Team Volleyball vs. Team Glee.
Pomp and Circumstance
I like Team Glee more than Team Volleyball, but I want an all-girl team to win this year, so it was tough to know that one of them would go. All the suspenseful editing in the world couldn’t have made me believe that there was even a chance the Gleeks would survive, though. They were just starting to arrange the inside of their tent when the Volleyball girls were making a couple last-minute adjustments. Team Volleyball arrived at the pit stop in eighth place. 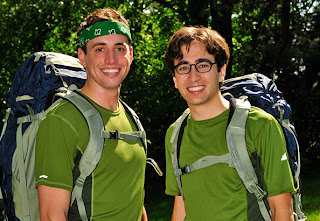 Poor Team Glee, they were eliminated from The Amazing Race on the day of their graduation from Princeton University. A little less studying and a little more sledding down hills on cafeteria trays would have served them well. (Get it? Cafeteria trays? Served? OK, it was accidental and the pun is a stretch. But still.) They were pretty adorable when they sang their way to the mat (and it was pretty hilarious when Harry Potter admitted he botched the ending to the song), and then it was less adorable and more annoying when they performed what had to be a prepared song about The Amazing Race. But then they won me over, again, when they threw their hats into the air and then clicked their heels in the air in unison. They were a funny little team and I was sad to see them go.
Which team do you think is looking the strongest so far? Could it be one of the all-female teams? With Team Glee gone, does Mallory now take the spot as Most Hilarious and Adorable? And are you looking forward to Claire telling Brook to “shut up” next week?

The Amazing Race: They're hot and they're cold, they're yes and they're no...
https://haligonia.ca/the-amazing-race-theyre-hot-and-theyre-cold-theyre-yes-and-theyre-no-27536/