Are the clues getting  harder, or are the racers getting stupider? This week’s episode of The Amazing Race once again found teams messing up in every possible way – all except one team, snowboarders Any and Tommy. They’ve definitely stepped into the forefront as the team to beat this season. 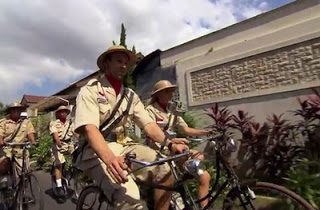 The teams stayed in Indonesia this week, so there were no equalizing flights to even the playing field – instead, the first task required teams to bicycle to their next destination. This was a breeze for Andy and Tommy, who jollily rode their bikes like surfboards at one point, but it was the cause of a lot of stress for poor Cindy when her partner Ernie’s bike broke. Cindy is the complete opposite of the snowboarders – not Zen at all. It turns out that in Cindy’s intense training for the race (she and Ernie took language courses, studied geography, exercised a lot, etc.) she’d forgotten to learn how to repair a bicycle. What an oversight!

Once they’d completed the bike ride, teams faced the Detour: Rice Field or Grass Fed? Almost all the teams chose Grass Fed, which seemed to be the easier option. In that challenge, they had to each fill a bag with grass, collect a sheep, and filling a trough with water. Team Snowboarders blew through that challenge, presumably because of their extensive experience with grass. (Get it? Get it? I love stereotypes.) Laurence and Zac were right on their tails, but as they worked side by side the snowboarders noticed their opponents making a mistake – they were using four buckets to fill the trough instead of only two, as instructed. Both teams moved on, but I knew Laurence and Zac would be facing some kind of penalty for that. Read your clues, people!

On top of being the easier challenge, Grass Fed provided a lot of physical comedy, from uncooperative sheep being lugged around and protesting with a loud “baa-aaah” to Cathi falling in the mud again and again. 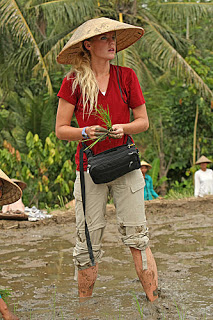 The two teams (Team Showgirl and Team Twin) who went for Rice Field had to present lunch to some farmers, and then plant 300 seedlings of rice while they ate. It looked like tedious and tiring work, not to mention muddy. Surprisingly, another team ended up opting for the rice challenge as well – when Amani and Marcus were told their bags weren’t full enough with grass (something that set back many teams), they decided to switch Detours. Such a bad idea! They were already in last place due to a confused cabbie, and completely capable of finishing the task they’d originally selected. Switching Detours is rarely a good idea, and here it definitely was not.

Buddhist philosophy revolves around suffering, and when teams arrived at the Roadblock suffer they did. Once teams had climbed the steps of the Borobudur Temple, one team member had to go around and count the four distinct Buddha statues. The clue was very carefully worded so that it was a little unclear exactly what teams had to count. The trick was that not only did they have to present the numbers to the guy holding the next clue, they also had to show him the hand gestures of each statue. As in “There were seventeen of these, these, and these and eighteen of this”.


Arriving at about the same time, Laurence and Tommy decided to work together to count the Buddhas. I’m usually not a fan of teams working together, but here it made sense – they knew they were the top two teams, so why not help each other out to keep a greater distance between themselves and the middle of the pack folks? After one incorrect try (they had the right numbers but not the hand gestures), Laurence and Tommy figured out the trick and moved on. For others, it was not nearly as easy.

As other teams arrived, they made a plethora of mistakes from counting carvings of Buddha as well as the statues (upwards of 400) to forgetting there were four distinct Buddhas and arriving at an answer of 69. Sandy and Jeremy faced an added challenge when their taxi broke down about a kilometer from the temple. They ended up having to run the rest of the way. 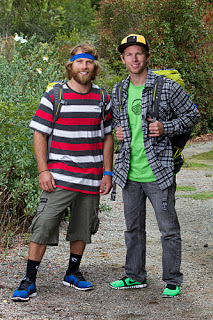 Despite all this, it still seemed like Amani and Marcus were too far behind to catch up…until they met up with the snowboarders on their way out of the temple as they arrived. For some inexplicable reason, Andy and Tommy decided to give the NFL-er and his wife the entire answer to the Roadblock. The whole thing! I HATE when people do this. Hilariously, though, both Marcus and Amani forgot everything the snowboarders had told them by the time they arrived at the Roadblock. I mean, really, guys? If you can’t even remember the answer that someone tells you, then you really deserve to be eliminated.

Meanwhile, the sailors arrived first at the pit stop, but Phil informed them of a 15 minute penalty they’d incurred for using too many buckets at the Detour. This allowed the snowboarders to pull out another first place finish, but luckily Laurence and Zac still managed to land in second place. They lost a pretty amazing looking trip to Dubaii, though!

Back at the temple, people started to work together to try and figure out the clue. They read the clue more carefully (read your clues, people!) and realized what they’d done. So each person went and counted on of the four Buddhas, and they shared that information in order to move on. Then Jeremy and Sandy discovered a blessing in disguise – while everyone else had to go track down their cab drivers and settle up before walking to the nearby pit stop, they didn’t have to – they’d paid their driver when his cab broken down before arriving at the temple! So while everyone else was scrambling, they breezed into third place. Marcus was also saved by this situation – he and Amani had paid their cab driver when they arrived at the temple, and that helped level the playing field after Marcus finally figured out the correct answer. 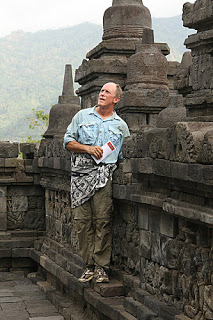 In fact, locating their cab drivers turned out to be a challenge almost more difficult than the Roadblock itself. While Justin and Jennifer, Ernie and Cindy, Amani and Marcus and Bill and Cathi arrived at the pit stop in fourth through seventh places, Kaylani and Lisa and Liz and Marie were still wandering around the park lot looking for their cabs.

By the way, who else was super impressed with Bill during that Roadblock? He was the only person to managed to get the correct answer without working with any other team or receiving help from someone.  Go Team Farmer! I don’t think Bill and Cathi will win, but you’ve gotta hand it to them for giving it their all. 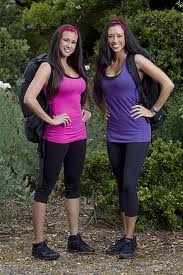 I didn’t really have much of a preference over whether the twins or the showgirls would go home, did you guys? Liz and Marie managed to settle up with their cab driver first, and grabbed that final, eighth spot at the pit stop. Kaylani and Lisa were eliminated, which at least means I won’t need to spend another Sunday night wondering if they’re really wearing false eyelashes (or perhaps they have those eyelash extensions I’ve heard of?) during The Amazing Race. Kaylani broke down in tears at the pit stop, feeling as though she’d let down her mysteriously Scandinavian looking four year-old daughter.

Next week the teams travel to Thailand – do you think Team Snowboarder will continue to Zen their way to the head of the line? What did you think of this week’s episode?