I didn’t watch The American Music Awards last night. I thought about watching them tonight, but after reading reviews, a list of the winners and watching some performances on YouTube, I’ve changed my mind.
First of all, I don’t care who won. I hear it was mostly Justin Bieber. But frankly, these awards aren’t really that great. What are they based on? Sales? Of what? Or do people vote? Does anyone care?
Second of all, after watching a few performances on YouTube during my lunch break, I don’t really feel inspired to devote any actual time to the rest of the show. 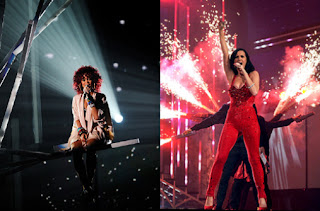 Rihanna‘s medley was pretty good. I could have done without the downer opening, but “What’s My Name” and “The Only Girl in the World” were fun and energetic. Katy Perry delivered possibly the weakest vocals I’ve ever heard from her, and her voice definitely sounded strained. I guess you could give her props for not lip-syncing, but it was a disappointing performance. 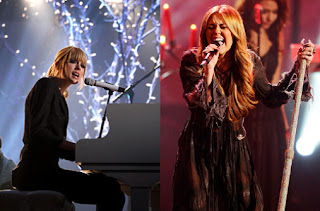 Meanwhile, both Taylor Swift and Miley Cyrus delivered solid but unmemorable ballad performances. Taylor looked fantastic, and people who complain about Miley’s skankariffic usual performances should have been pleased with her modest black dress. 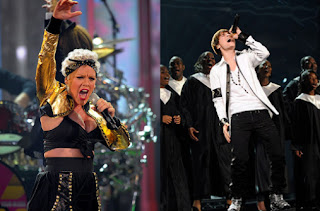 Pink‘s performance of “Raise Your Glass” (one of my new favorite songs) was fun and silly, but it isn’t exactly a performance I’ll remember forever. And while I actually watched Justin Bieber perform last night (right before I turned off the TV) I have nothing to say about it. I just don’t get the appeal of that kid. 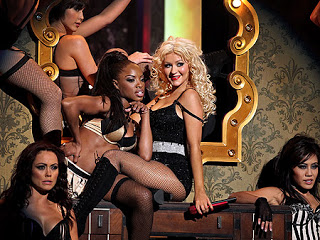 Ne-Yo and Christina Aguilera both showed that there are people in the music industry who can actually sing with their performances, but Train seriously disappointed.
The rest of the performances I just don’t care about. How many times can I watch Bon Jovi do a medley? And hasn’t everyone stopped caring about The Backstreet Boys and New Kids on the Block yet? And why is Ke$ha still famous?
Did you bother watching the show? What did you think?

The American Music Awards: A post on something I don't plan on watching
https://haligonia.ca/the-american-music-awards-a-post-on-something-i-dont-plan-on-watching-29454/