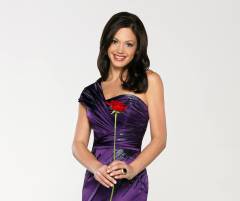 If you’ve watched one or two or fifteen seasons of The Bachelor and The Bachelorette, then you probably know that the structure of this season has been different. The “Men Tell All” episode came early, and usually the episode with the final three wouldn’t be called “The Finale, Part 1 of 2″.

Something is fishy in Antigua!

I started watching this show late because I was watching The Amazing Race Canada live, and I had to log out of Facebook and Twitter to avoid seeing spoilers. All I knew going in was that everyone was saying how crazy the episode was.

Des and Drew spent the day together exploring Antigua, which is basically my favorite kind of date. Drew seems too good to be true and kind of tightly wound in that Jake Pavelka kind of way, but I’ll admit to liking him early on. He has a nice smile and the same job (digital marketing) that I do.

On the date, Drew was talking about how much fun he has with Des and how this is what their vacations as a married couple would be like. But having seen previews for this episode all season, I was waiting for the other shoe to drop.

Drew excitedly accepted Des’s invitation for an overnight in the fantasy suite. In fact, he basically proposed.

I was so sure that Drew would be the guy to drop out of the running this week, but I was wrong. Brooks looked like hell. He was nervous about the overnight date and whether he should say “I love you” – the answer was no, because it didn’t seem like he loves her. Brooks actually went back to Boise to talk to his mom and sister about his feelings. That’s never a good sign.

I’m surprised. I really thought that Des would either end up with Brooks, or with no one. “The idea of proposing to her at the end of this makes me really uncomfortable,” Brooks told his family. OMIGOD! A normal, reasoned guy! This show is so crazy and fast, I always question the sanity of anyone who thinks they’re in love after only a couple dates. Brooks’ nerves show that he has a good head on his shoulders.

I don’t really “get” Chris, but Des seems into him. They had a picnic on the beach, and then dinner later. Chris asked Des if she’d move to Seattle if they got engaged, and Des basically said that she feels at home in California but will sacrifice for love. UGH. Why is the girl always the one to move? Every. Time. I feel like going on The Bachelor just so I can try and make someone come to me.

Chris went to the fantasy suite with Des, and read some sappy diary entry or something to her. This? This is why I can’t get on board with Chris.

Des admitted before her date that despite her feelings for the other guys, she feels more for Brooks. Poor girl.

Before Brooks met Des, he had a date with Chris Harrison. I felt bad for Brooks, because it seemed like if he had met Des under normal circumstances, it might have been a good thing. But the pressure to say “I love you” so quickly and propose insanely fast was getting to him. It feels pretty normal to not be sure if someone is the love of your life after two months. But on this show, you MUST know RIGHT NOW.

What I *hated* was Chris Harrison playing therapist and asking Brooks if his fear to commit came from his parents’ divorce. Ugh. Really? This is like, so normal, to be unsure about a relationship when your girlfriend is dating two other guys and you’ve only known her for a couple months. But no – it’s because Brooks is from a broken home, guys.

Obviously, Des knew something was wrong with Brooks as soon as she saw him. Maybe because he looked like he was just coming off a four day bender.

His breakup speech was long and painful. It went on way too long, and it seemed like Des was just sitting there, knowing she was getting dumped. Rough.

The conversation was probably one of the most genuinely sad things the show has ever seen. Brooks seemed like he was really struggling, and Des seemed totally heartbroken. “It just sucks that I loved you,” she told him. That pretty much summed it up.

The worst was towards the end, when Brooks was kind of like “Well maybe I do love you.” I kind of get it. Maybe he does love her, but the show is just too much  pressure for him to really have any feelings. Or maybe he’s just an asshole. I don’t know. I don’t know him. What I do know, is that after the commercial break I no longer felt like hearing Des cry.

Next week…when the dramatic Bachelorette finale continues with a live studio audience!

The audience thing suggests that maybe Des just drops out of the show, right? Is she just going to dump Drew and Chris on the spot and call it a day? Poor Des has had possibly the unluckiest Bachelorette career in the history of the show. Her cast was filled with jerks, and she got dumped by the guy she liked the most. Brutal.