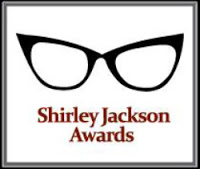 In recognition of the legacy of Shirley Jackson’s writing, and with permission of the author’s estate, the Shirley Jackson Awards have been established for outstanding achievement in the literature of psychological suspense, horror, and the dark fantastic.

The winner of the 2012 Shirley Jackson Award in the Novel category is:

“Edge begins with a massive and catastrophic shifting of the San Andreas fault. The fears of California someday tumbling into the sea–that have become the stuff of parody–become real. But even the terror resulting from this catastrophe pales in comparison to the understanding behind its happening, a cataclysm extending beyond mankind’s understanding of horror as it had previously been known. The world is falling apart because things are out of joint at the quantum level, about which of course there’s never been any guarantee that everything has to remain stable.

Koji Suzuki returns to the genre he’s most famous for after many years of “not wanting to write any more horror.” As expected from Suzuki, the chills are of a more cerebral, psychological sort, arguably more unsettling and scary than the slice-and-dice gore fests that horror has become known in the U.S. Never content to simply do “Suzuki”–as it were–but rather push the envelope on what horror is in general and for which readers have come to know him, Edge borders on being cutting-edge science fiction. The author himself terms this novel, which he has worked on for some years, a work of “quantum horror.”” -Publisher

” When you open your eyes things already seem to be happening without you. You don’t know who you are and you don’t remember where you’ve been. You know the world has changed, that a catastrophe has destroyed what used to exist before, but you can’t remember exactly what did exist before. And you’re paralyzed from the waist down apparently, but you don’t remember that either.

A man claiming to be your friend tells you your services are required. Something crucial has been stolen, but what he tells you about it doesn’t quite add up. You’ve got to get it back or something bad is going to happen. And you’ve got to get it back fast, so they can freeze you again before your own time runs out. Before you know it, you’re being carried through a ruined landscape on the backs of two men in hazard suits who don’t seem anything like you at all, heading toward something you don’t understand that may well end up being the death of you. Welcome to the life of Josef Horkai….” – Publisher

“Using lovely, reflective, and funny prose, Kiernan explore a young girl’s deviation from reality as she struggles with mental illness. Indian Morgan Phelps, Imp to her friends, is schizophrenic and attempting to write a factual story of the night a drowned girl appeared to her. A self-described unreliable narrator, Imp’s fragmented mind fights her memory, which produces multiple realities. Imp knows the drowned girl is Eva Canning and that she suddenly appeared on the road Imp was driving, but was Eva in the form of mermaid, siren, or wolf, and was it July or November? Attempting to write down the factual events of an ever-shifting story drags Imp into the murky waters of insanity, which threaten her life. The result is an excellent piece of fiction, both startlingly original and suspenseful” – Booklist

The Devil in Silver (M)
by Victor LaValle

“Pepper is a rambunctious big man, and, suddenly, the surprised inmate of a budget-strapped mental institution in Queens, New York. He’s not mentally ill, but that doesn’t seem to matter. On his first night, he’s visited by a terrifying creature who nearly kills him before being hustled away by the hospital staff. It’s no delusion: The other patients confirm that a hungry devil roams the hallways when the sun goes down. Pepper rallies three other inmates in a plot to fight back: Dorry, an octogenarian schizophrenic; Coffee, an African immigrant with severe OCD; and Loochie, a bipolar teenage girl. Battling the pill-pushing staff, one another, and their own minds, they try to kill the monster that’s stalking them. But can the Devil die?” – Publisher

“*Starred Review* When Nick Dunne’s beautiful and clever wife, Amy, goes missing on their fifth wedding anniversary, the media descend on the Dunnes’ Missouri McMansion with all the fury of a Dateline episode. And Nick stumbles badly, for, as it turns out, he has plenty to hide, and under the pressure of police questioning and media scrutiny, he tells one lie after another. Juxtaposed with Nick’s first-person narration of events are excerpts from Amy’s diary, which completely contradict Nick’s story and depict a woman who is afraid of her husband, has recently found out she’s pregnant, and had been looking to buy a gun for protection. In addition, Amy is famous as the model for her parents’ long-running and beloved children’s series, Amazing Amy. But what looks like a straighforward case of a husband killing his wife to free himself from a bad marriage morphs into something entirely different in Flynn’s hands.

As evidenced by her previous work (Sharp Objects, 2006, and Dark Places, 2009), she possesses a disturbing worldview, one considerably amped up by her twisted sense of humor. Both a compelling thriller and a searing portrait of marriage, this could well be Flynn’s breakout novel. It contains so many twists and turns that the outcome is impossible to predict.” – Booklist

Outstanding Achievement in the Literature of Psychological Suspense, Horror, and the Dark Fantastic- The Shirley Jackson Awards
https://haligonia.ca/outstanding-achievement-in-the-literature-of-psychological-suspense-horror-and-the-dark-fantastic-the-shirley-jackson-awards-80247/