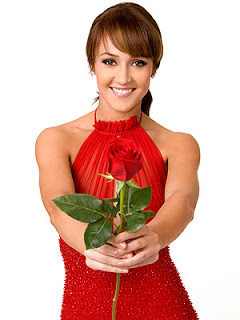 The Bachelor(ette) franchise Fantasy Suite dates never cease to give me the creeps. You’re going to invite all three girls/guys to spend the night? Is that three nights in a row? How much time do you have in between dates? Are there three Fantasy Suites or just one? Do they at least change the sheets? Eeeeewwww.

Luckily, Ashley only had to worry about checking for bed bugs in two fantasy suites, because one of her suitors unexpectedly dumped her over dinner and jetted off the island faster than you can say “Wait, are you Ben or Constantine?” But more on that later.

After yet another review of Ashley’s remaining three guys and what she digs about them, Ashley was greeted with a surprise in Fiji – sun! No, not actual sun. The Bachelorette can still only afford to travel during the off season. No, I’m talking about Ryan Sunshine! He came back!

Ryan felt like his relationship with Ashley had been left unresolved, so he called up his good buddy Chris Harrison and asked to come back. And they just let him! God, are there no rules at all on this show? Crack down, Harrison! You’re letting the inmates run the asylum! You can’t just let people come back! Except, apparently, they can. And what a good way to score a free vacation! I mean, really – you get kicked off the show, you go home and recuperate a little, you wait for them to hit a beautiful, exotic island, score a free trip, pour your heart out to the girl and then hang around waiting to see what she decides. Oh gosh, how tough.

Ryan looked pathetically optimistic as he poured his heart out to Ashley and she looked awkward. Very awkward. He told her to think about it, and she said she would. But come on – she didn’t have time to think! She had fantasy suites to disinfect!

For the first date of the episode, Ashley and Ben headed out on a giant boat to enjoy the ocean and, you know, each other and stuff. Not that I really care (really, it’s insane how little I care about the outcome of this season) but I think Ben seems like the right guy for Ashley. And did he get a haircut? Cute! Or at least, like, tolerable.

At some point on the date the two of them got very, very drunk – or so the post-credits clip of Ashley begging him to kiss her disgusting bunion-covered toes led me to believe. So I’ll blame Ben’s poor choice in dinner attire on his intoxication, because a sheer white sweater was not a good choice. You could see his mic pack through it, and it made him look like a tourist wearing one of those unfortunate hidden money pouches. So sexy.

Ben had planned to drop the L-bomb (oh god, I hate that term, why did I just type that?) on Ashley over dinner, but instead he panicked and mumbled “I’m on my way to the whole ‘I love you’ thing.” Wow, soooo romantic. That’s what every girl dreams of hearing before getting engaged to a guy. Come on, Ben! Step it up! Ben’s lack of eloquence in professing his almost-love for her didn’t stop Ashley from practically throwing the fantasy suite key at him, though. Bedroom time! Aaaand, fade to black.

Was Constantine’s date the first helicopter we’ve seen this season? If not, there still seem to be far fewer helicopter rides than usual this season. What gives? The helicopter took Ashley and Constantine to a really cool waterfall, where they “took a leap of faith” and jumped into – you know what? I can’t finish typing that sentence without throwing up. I HATE “leap of faith”/jumping off something high analogies. Two totally different things, people. Stop pretending like if you can jump off a cliff you can jump into a relationship. Lots of stable, emotionally available people have crippling fears of heights. And lots of other people are fully capable of, oh say, doing the world’s highest commercial bungee jump in South Africa without batting an eye while they aren’t particularly into taking “leaps of faith” (barf) when it comes to trusting people other than the ones hooking up the bungee cords. And that’s totally normal, OK? Stop trying to sell me on the idea that it’s not! God!

Anyway, I digress. My theory was proved correct anyway, because even though Constantine took a “leap of faith” when it came to jumping off a rock, he wasn’t ready to do so with Ashley. (Seriously, barf.) Ashley quizzed Constantine over dinner about why their relationship was moving so slowly, and why it took him so damn long to buy a house, and god would you just fall in love with me already? It was just too much for the guy. So out of “respect” for Ashley, not only did Constantine decline the fantasy suite invitation, but he bowed out of the competition altogether.

(Around this time, Obama interrupted to talk about the debt crisis. I immediately phoned my mom to say “Are you freakin’ kidding me?!”, but since that’s what she answered the phone with, she beat me to it. All I can say is, thank god for being able to switch over to a Canadian channel. The one night a week I have something to watch in the summer, and Obama interrupts to tell me how much money his country owes? God, I don’t interrupt his TV shows to tell him about my Visa bill, do I? Come on!)

I wasn’t particularly shocked to see Constantine go. It was obvious he wasn’t the guy for Ashley, and considering she didn’t shed a single tear over his exit I’d say she was fine with it too. Now, can we all just take a moment and offer Constantine some golf claps for what was probably the most respectful, level-headed, intelligent speech ever delivered on one of these ridiculous shows? Here it is:

“I would want, ideally, for me to be madly, head-over-heels, 100 percent sure, ready to meet your father and say, ‘I want to ask for your daughter’s hand in marriage,’ and say that with 110 percent confidence, and I have too much respect for you, for myself, for my family, and ultimately your family also, to do anything but that. I’m sitting here now, like, thinking, I don’t have that yet. This fantasy suite, I know what it means…and I also know what it implies. And I knew if I got to this point and I wasn’t in love with you, I wouldn’t accept the fantasy suite…I’m not pretending, and I haven’t pretended to begin with, and I don’t want to start doing that now.”

Ignore the run-on sentence and just absorb what was said. He respects her. And himself. And their families. He turned down the fantasy suite because he wasn’t in love with her. You guys! I’m so impressed with him that I’d say “Constantine for the next Bachelor!” but instead, he’s so damn admirable, that I’m just going to say I really, really hope that Constantine meets a nice girl, settles down, and never has anything to do with this show or anyone from it ever again. Because really, that’s better.

With Constantine out of the picture and a fantasy suite up for grabs, I thought Ashley might throw Ryan Sunshine a bone, but she’s just not that kind of girl. Instead, she shot him down a second time. And once again, it was like watching someone kick a puppy. Poor guy, he took all this really hard. I mean, he’s 31, you guys! That’s, like, old. The window for happiness is about to slam shut. Or at least, that’s what Ryan Sunshine seemed to think. He was pretty heartbroken that Ashley wouldn’t give him a second chance. Ryan’s list of enemies now goes something like this:
1. Ashley
2. Global Warming
3. Matthew Morrison, for looking somewhat like him but slightly more handsome

J.P. definitely got the best date of the week – a ride on one of those cool water planes and a trip to a private beach. But I always find Ashley’s dates with J.P. to be really boring – like, even duller than her dates normally are. The most exciting thing about Ashley and J.P.’s date? The cruel joke she played on him.

This was particularly funny because J.P. has probably been the most jealous of all the guys this season. He and Ashley sat snuggling after dinner, and she told him it had been a crazy week. Why? Oh, because “I said goodbye to two guys this week,” Ashley told J.P.

Really, Ashley? Really? You were going to tell this poor schmuck, one of three dudes remaining, that you sent home two people? You were going to let him sit there with that hopeful look on his face, thinking that he’d already won? Really? Rude. Finally, Ashley let J.P. in on the important intel that one guy had actually returned, so Ben was still kicking around. I’m pretty sure J.P. cried when he realized he wasn’t actually the only guy left. Luckily, his disappointment didn’t deter him from taking Ashley up on her fantasy suite invitation.

Will you accept this rose?

Even though she had two guys and two roses, Ashley still held a rose ceremony. It was important, you know, for the guys to accept her rose. And, you know, they did.

Get ready, folks, because on Sunday night we’ve got the “The Men Tell All” episode, followed by the finale on Monday night. Any predictions? I think she should choose Ben, but if you held a gun to my head (and this show would be a terrible reason to do that) right now I’d guess that she chooses J.P.

The Bachelorette: Finis in Fiji
https://haligonia.ca/the-bachelorette-finis-in-fiji-41246/