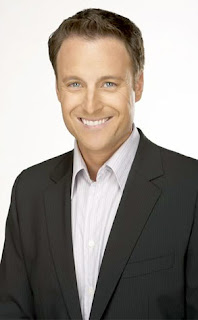 In case you didn’t hear, yesterday was the fourth of July. So happy independence day, American readers! Of course, you all were too busy chowing down on BBQ, lighting sparklers, and doing whatever else it is that you do on the birth of your nation (let’s face it – you do pretty much whatever I did on the day of the birth of my nation, only three days later) to watch reality television. This is a travesty, I know – what better way to celebrate the U.S. of A. than to watch wannabe celebrities make fools of themselves on TV?

Anyway, this meant The Bachelorette was a rerun last night, and therefore I wouldn’t have anything to write about today. But then I saw this. Yes, Chris Harrison decided to provide his weekly blog post to Entertainment Weekly despite the fact that his show wasn’t on this week, and he managed to be even more pompous and obnoxious than usual.

In his post, Harrison discusses his upcoming interview with one half of last season’s now split couple – Emily and Brad have broken off their “engagement” (again) and Emily will sit down with Chris to air out all the dirty laundry of the relationship’s demise. This is not what I judge – the post-breakup interview is pretty much par for the course with the Bachelor/ette franchise. No, what I’m judging is the inexplicable self-righteousness with which Chris Harrison describes the interview.

According to Chris Harrison, “As you have no doubt heard already, Brad and Emily have unfortunately broken up. They attempted to remain quiet and private, but with so much attention being paid to them it just wasn’t possible. For that reason, Emily reluctantly came in and sat down with me to talk about her relationship, what went wrong, and how the circus surrounding them has affected their lives.”

Good. Lord. Actually, Chris, the reason I heard Brad and Emily had split up was because Emily was on the cover of People freakin’ Magazine announcing it. That’s why. And then I heard about the interview she’s doing with you. Otherwise, I might have escaped it. She reluctantly came in for an interview? Puh-lease. They could have both kept their lips sealed on the reasons for the breakup, and in about 30 seconds everyone would have forgotten Brad and Emily ever existed. I might watch The Bachelor, but I’m not stupid. Don’t try to sell me on the idea that she HAD to do this or people would just never leave her alone.

You know what else bugs me, Chris? The way you say “Both Brad and Emily are friends of mine.” You say this EVERY DAMN TIME. Do you know how many people have been on The Bachelor and The Bachelorette? You can’t possibly be friends with all of them. Also, you did not really think the next time you sat down with them would be to plan their wedding. Their relationship went off the rails before they even went public as a couple. I didn’t think it was possible, but they had an even slimmer chance of actually marrying than your average reality TV show produced couple.

And then there’s this quote: “In this day and age of tabloid magazines that go to incredibly desperate lengths to stir up a story, bloggers who have absolutely no culpability for what they write, and paparazzi that could care less about the people they are hunting down, there is a scary atmosphere out there for people on our show as well as others.”

I’m sorry, is that a newsflash? Papparazzi are overbearing and bloggers are insensitive? I’ll double check with Al Gore, but as far as I know the Internet was not invented yesterday. Don’t we all know by now that if you go on a reality TV show or become a celebrity (or a “celebrity”) that people will inevitably write mean things about you on the Internet? Is this a surprise?

The same thing applies to Ashley. Chris writes “She too [Ashley] has felt the wrath of the media and even fans concerning her handling of the Bentley situation.” Oh no! You mean people have publicly questioned the judgment of a girl who went on a TV show that panders to the audience by stirring up tearful, dramatic situations and has an almost non-existent history of creating lasting relationships? You mean people are making fun of someone for choosing to put herself in the public eye and then making a complete fool of herself? Listen, Harrison – let’s say I’m at a football game, and someone at the game decides it would be a good idea to streak. And then that person slips on a banana peel and falls. Do I laugh? Of course! Not only is slipping and falling on a banana peel hilarious, but the person who fell chose to expose him/herself to a crowd of people who are ready and willing to mock! Sound familiar?

The Bachelorette: Oh, come ON!
https://haligonia.ca/the-bachelorette-oh-come-on-40066/