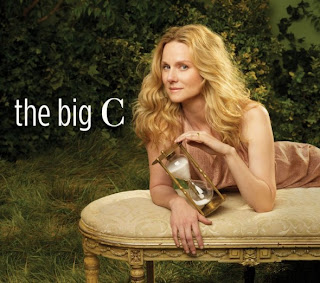 The Big C returned on June 27, and I think you can tell how excited I was about it based on the fact that watching it completely slipped my mind.

I ran hot and cold with The Big C last season. I started off intrigued, then grew bored and a tad annoyed with the show, and then it pulled me back in with the last few episodes. In particular, I thought the last two episodes were really compelling. Now, as we enter season two (I’ve watched the first two episodes, which have both aired) Cathy is “out” as having cancer and is dealing with a whole new set of issues.

Though I originally liked last season’s premise, where Cathy hid her cancer from everyone who was important in her life and made crazy, radical decisions, it grew weary after a couple of episodes. I’m glad to see the series take this important step. Watching Cathy react to seeing bubbly 16 year-old girls sell cupcakes on her behalf – with C’s on them for “Cathy”, not “cancer” – was hilarious, as was watching her witness her best friend’s self-involved reaction to learning about the cancer.

Alan Alda is guest-starring this season as Cathy’s new oncologist as she tries to get into a new clinical trial that could possibly save her life. The show still manages to hit the right tone of dark, twisted humor – for example, Cathy moans about another patient making it into the clinical trial instead of her, then feels guilty when she’s given a spot after the other patient dies.Gabby Sidibe is also back and brings a welcome dose of humor to the show.

I’m glad the show decided to keep around the character of Marlene as a figment of Cathy’s imagination since I always loved that character. I wonder if the show will be able to reach the same level of poignancy this season as they did with Marlene’s suicide last summer.

Did you watch The Big C last summer? Will you be watching again this season?