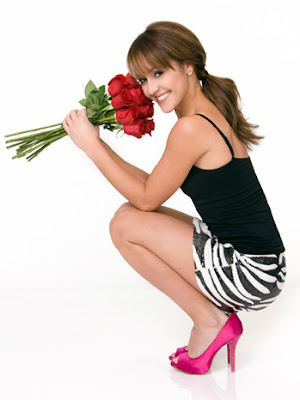 Pretty much anything would seem boring following last week’s train wreck episode of The Bachelorette, but this one seemed particularly dull, didn’t it? I mean, come on people – I didn’t tune in to watch people smile and be happy. I want tears!

OK, I’m kidding. Kind of. OK fine, not really. Stop pushing me. It’s just that Ashley is annoying AND boring when she’s happy. At least when she was insecure and heartbroken she was just plain annoying.

We kicked things off this week with a “spontaneous” announcement from the one and only Chris Harrison. “I talked to Ashley, and we both agreed,” he told the guys. “Time for a fresh start, time to move on.” And you know what that means? ROAD TRIP! Well, “the mother of all road trips”, according to Harrison. Which means crossing the Pacific ocean, presumably not in a tour bus. The guys were headed to Thailand, for the exact opposite of what you saw in The Hangover Part II.

Honestly, I loved how the producers tried to pass the trip off like Ashley had thought of it on a whim, not like ABC employees had negotiated a free trip to an exotic land during the off season. Ashley even showed up to concierge to “plan a few dates”, like that ever actually happens. Stop trying to take credit for other people’s work, Ashley, I bet those interns work really hard.

I’m not on a boat

For her one-on-one date with Constantine, “Ashley” had “planned” a special kayak trip. Sorry, suckers! The waves were too high to hit the water, and you don’t want to mess with that. So instead, the poor couple was stuck wandering the streets of Phuket, Thailand. Boring, right? It’s, like, totally a testament to their chemistry as a couple that they were able to connect in such a typical, everyday setting.

Constantine and Ashley’s date annoyed me for a number of reasons. The first, and most significant, was when they stopped to ask a random Thai man for love advice. Um, hold the phone – why was this man christened the love guru? Because he was Asian and had been married for 37 years? Would you stop an old man on the streets of Scranton, Pennsylvania and ask him for love advice just because he’d been hitched for 37 years? I think not. Anyway, his advice was “never try to win”, which Ashley very much took to heart and I laughed off as an obvious misinterpretation. No marriage of mine will work out if I’m not allowed to gloat over a Scrabble victory. Later, the couple toasted to “not winning”, which was perfectly acceptable for a couple of reality TV show losers not winners.

When Ashley and Constantine had dinner later, it seemed all they had to talk about was their date earlier that day. It started out with how oh, you know, they were able to roll with it and enjoy themselves despite the disappointing boat-less date. Then they upgraded it to fun, and by the end of the night Ashley had declared it “perfect”. I get it – Phuket is cool. But what about each other? Isn’t there anything you want to know? What kind of movies do you like? What’s your middle name? Any major pet peeves? Will you hold my purse when I’m in the washroom? Do you like Italian food? These are things you need to know! Sorry, but Ashley and Constantine’s date looked about as good as their hair. Despite this, she gave him a rose.

Charity in Thailand – That’s NOT the name of a stripper, get your minds out of the gutter guys 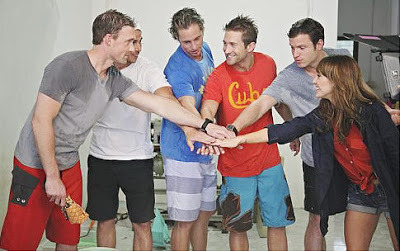 For the group date, Ashley took a load of guys (OK, it was Ben F., JP, Blake, Mickey, West, Ben C., Nick, Lucas, William, and Ryan) to a school or an orphanage or something to carry out the facade of helping. This act of superficial charity has become a staple of the franchise, much like casting villains to later appear on Bachelor Pad or making sure to give the new bachelorette a nice set of Jessica Simpson brand hair extensions before filming begins.

Ashley told the guys that “as some of you may know,” a tsunami had devastated Thailand in 2004. Yes, as some of you may know. Those of you who were, say, working on Mars or living under a rock at the time might not have heard about it. These are the same people who think Katrina is a character on True Blood.

As the guys worked away, Ryan started to annoy them with his can-do attitude, or something. I mean, come on guys – what do you expect? The guy is a solar energy executive. He makes a living off sunshine and energy. Of course he’s chipper.

While the guys painted the walls garish colors of bubblegum pink and Trident gum green, Ashley connected with Ben F., who I would think was Dax Shepard, if I didn’t know that Dax Shepard is engaged to Veronica Mars, and no one would ever leave Veronica Mars for Ashley. We also got a lot of robotic sound bites from Lucas, who spoke with zero passion about what a great experience the charity work was. The guy who really sold the experience was JP though, who said more than once that “This has forever changed my life.” OK, buddy, calm down. You painted a couple walls, you didn’t fix any cleft palates or find a cure for HIV.

After the charity work, Ashley joined the guys for the requisite post-charity poolside cocktail party. She kissed both Ben F. and JP (who awkwardly tried to pick her up and fell), but most of the guys spent the evening bashing Ryan for being too cheerful. Honestly, guys, do you want me to make you a slam book? Graduate from high school already. In the end, Ashley presented Ben F. with a rose.

The final one-on-one date of the episode went to Ames, who appeared to get the boat/kayak date that had originally been promised to Constantine. I guess Ashley didn’t want to lose the deposit she’d paid when she booked with concierge, huh? This date provided the opportunity for a lot of boating/relationship metaphors, like how love can’t be navigated and love is like kayaking through a tunnel and, you know, other things that make me want to never, ever fall in love or ride in a kayak.

Ames flattered Ashley by telling her how beautiful she looked “rain or shine, day or night, at sea or on land.” It’s so funny you guys, because I was thinking almost exactly the same thing! Only instead of beautiful, I was going to say disheveled. Seriously, what genius had the idea to give Ashley bangs right before sending her to a humid climate?

What really impressed me about this date, though, wasn’t the spectacular scenery but the actual normal conversations they had. They talked about things like what they want out of life! And what Ashley wants is to give her future children the complete opposite upbringing from what she had. Hi, mom and dad! Thanks for nothing!

Ames came across quite well actually, so it’s really a shame that he kind of looks like a Ken doll that was put in the Easy Bake Oven. He’s smart, funny, bizarrely well-traveled and spontaneous. I could look at lopsided eyes for the rest of my life if it meant getting to travel to 70 countries! I’d just ask Jeff if we could borrow a mask. Ames definitely impressed Ashley, and she gave him a rose.

Cocktail party time! This week, Ashley’s Bentley-inflicted wounds had healed just enough for her to actually be able to interact with other men. First she grilled West about his dead wife, but she asked all the wrong questions. She was all “Will I have big shoes to fill?” when she should have been all “Were you allegedly involved in her untimely death in any way?” Later, she grilled Lucas on his failed marriage, but she failed to read between the lines. When Lucas said he’d been “dating different types of women” and “keeping an open mind” since his divorce, he meant he’s “been a total man-whore.” And when he said they just “fell out of love”, he meant he “fell out of love after falling into bed with my secretary.” Oh come on, I could be right – he just has that smarmy look about him.

Later, Ashley questioned Ryan P. (does the “P” stand for “Pollyanna”?) about his sunny disposition, but he was too rattled to give a good answer since Blake had just told him that everyone unanimously finds him annoying. Considering how clearly Blake had ruffled his feathers, I think Ryan probably could have answered Ashley’s “What makes you mad or sad?” question with “People who keep asking me why I’m so damn happy all the time!” Or at least “People who don’t support the troops,” since he seemed rather passionate about them as well.

Before the rose ceremony, Ashley and Chris Harrison rehashed her week of dates – but mostly, they talked about Bentley. Yes, “Bentley” was the sign to do a shot this week, and if you played along you would have gotten pretty darn drunk. Ashley wouldn’t shut up about him! Despite her lingering, inexplicable feelings for Bentley, Ashley felt like there was only one dude she could part with that week and asked Master Harrison for an extra rose. You see, she wanted to make sure she left with no regrets, and out of all those men there was only one she absolutely knew she couldn’t stand. Or at least, that’s the subtext I got.

First Ashley called Lucas, and everything about his reaction made me want to barf. Then she called Ryan, JP, Nick, Mickey, Blake, William and Ben C. She sent West and his dark, questionable past packing.

Next week Ashley and the boys head to a new part of Thailand, where Bentley will meet up with them just so he can mess with her mind a little more. Will they just show her the evil footage, already? God, it’s like all they care about is creating drama for TV and not even her feelings or anything. I can can’t believe it.

The Bachelorette: Rain on the Parade
https://haligonia.ca/the-bachelorette-rain-on-the-parade-39204/