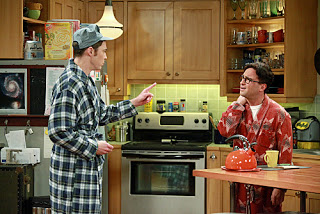 With The Big Bang Theory now in its fifth season, I’m really glad the show decided to introduce new characters to the show. Amy and Bernadette now feel like old friends, like they’ve been around forever, and their presence has allowed the show to explore a lot of new storylines it wouldn’t have otherwise been able to do. It’s kept the show from getting stale.

“The Pulled Groin Extrapolation” is a great example of this, since it heavily featured Amy and Bernadette’s relationships with the guys. Bernadette spent the weekend at Howard’s house with him and his mom, as something of a dry run for their future married life. Of course Howard was planning on living with both his wife and mother – but if I were Bernadette, I’d put my foot down on that one.

The storyline worked so well because Melissa Rauch is such a great comedic actress. The way Bernadette seamlessly transitioned between her own high-pitched, sweet voice and a barking shout eerily similar to that of Howard’s mother. We saw her do this last week when she confronted Raj, and the joke just doesn’t get old.

Meanwhile, this episode was the first time we really got to see Leonard and Amy interact on a one-on-one basis. After everyone left following a dinner of Thai food, Amy stuck around to read a magazine (and then to think about what she’d read) while Leonard awkwardly tried to go about her business, to polite to ask her to leave. The mix of their mutual lack of social skills made for a great scene, especially since it resulted in an agreement that Leonard would accompany Amy to an upcoming wedding.

The wedding scene was even funnier – Leonard was a sullen drag while Amy was being as social as she could possibly be. As she herself put it, she was “delightful”. When she finally dragged Leonard out onto the dance floor and got him to forget about Priya for a while (Priya has got to go), he actually had fun.

I really, really enjoy Mayim Balik on this show. Amy is almost as socially awkward as Sheldon, but the difference is that Sheldon holds no interest in having a social life. Amy’s desperate, aggressive attempts to have friends are hilarious. And of course, following the wedding Amy was worried that Leonard had fallen head over heels in love with her when, really, it was just the beginning of a real friendship. And the best part of all of this? Sheldon was jealous! Sheldon might not have an interest in a sexual relationship with Amy, but he also doesn’t want to see Leonard in one with her either. He reacted to the news that they’d had a good time at the wedding by karate chopping Leonard and saying “Not for you.”

Overall, another great episode. What’d you guys think? And, here are a few of my favorite quotes from the show:

The Big Bang Theory: All aboard!
https://haligonia.ca/the-big-bang-theory-all-aboard-44366/