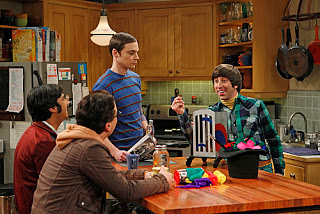 Yes, yes, yes. Admittedly, I had some reservations about the idea of Sheldon and Amy having a “relationship agreement” when it was introduced back in November. But that was before I knew that their monthly date nights would begin with approving the minutes from the previous month’s date. That’s just gold.

“The Shiny Trinket Maneuver” centered around Sheldon’s realization that he’s not exactly “boyfriend material”, and it was hilarious. All the storylines had me cracking up.

When Sheldon and Amy met at the Cheesecake Factory for their monthly date (the second Thursday of every month, or the third Thursday in a month with five Thursdays) Amy’s feelings were hurt when Sheldon elicited no reaction to some exciting professional news Amy had. She shouldn’t have been surprised – Sheldon’s always made it clear that he considers accomplishments in any field other than physics to be nothing to write home about. But now he’s her boyfriend, and she was mad at him.

Leonard told Sheldon that to repair the damage, he’d have to listen to Amy and show that he understands her feelings and will try to grow as a person. Uh, no. The second option, buy her something pretty, had Sheldon Cooper all over it. So off to the mall he went, with Penny as his guide.

I loved this material so much. Amy was disappointed because she legitimately believes that her relationship with Sheldon is special. Sheldon is disappointed because he’s in a contract to be a boyfriend, and he expects to do well in that role – he’s Sheldon Cooper, he has a working knowledge of the universe and everything in it. When he told Leonard “Hard as this may be to believe, it’s possible I’m not boyfriend material,” he legitimately sounded surprised and disappointed. 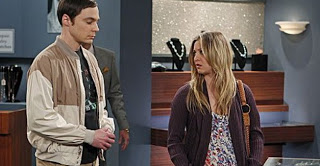 Sheldon and Penny in the jewelry store was fantastic – I love when these characters interact, and it was great seeing Penny having the upper hand. We didn’t see what Sheldon had settled on until he was at Penny’s apartment, secretly waiting for Amy to arrive so he could surprise her. (Since they weren’t speaking, he couldn’t arrange the meeting himself.) He got himself a pocket watch (obviously – it makes him look like a train conductor!) and for Amy he purchased a shiny, flashy tiara. Only Amy Farrah Fowler, and possibly a six year-old girl, would be so enthused with such a gift. I burst out laughing when Amy squealed “I’m a princess and this is my tiara!” and hugged Sheldon as he said to Penny “You’re right, a tiara is too much.”

Meanwhile, the B-plot went to The Big Bang Theory‘s other romantic couple, Howard and Bernadette. They hit a bump in their relationship when Bernadette revealed that she hates kids and isn’t sure she wants to have any. The revelation came when she acted as an assistant to Howard’s magician at his cousin’s birthday party.

What I liked best about this storyline was that it placed Howard in a likable, reasonable light for once. So often he’s a character that makes me cringe, but you can’t fault a guy for wanting to be a dad. He loves Bernadette and knows that he’s lucky for having a girl like her love him back, but he was right – the kids issue can be somewhat of a deal-breaker. I also liked the juxtaposition of Howard’s very real concerns against Bernadette’s over-the-top disdain for children. She’s so sweet, it’s hilarious to see her be so mean to kids.

Bernadette’s suggested compromise is that they have kids, and Howard acts as a stay-at-home dad while she brings home the bacon. After all, she makes significantly more money than he does. It was an interesting proposition and I liked seeing these two having such an honest conversation. Since Howard’s always been sensitive about Bernadette’s higher paying job and PhD, it should be interesting to see where this goes.

So what did you guys think of the episode? There were a lot of funny lines, so here are a few: