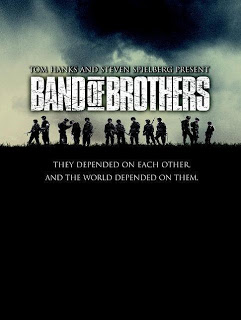 Guess what, guys? Almost two years later, I have finally followed through on my commitment to watch the HBO Miniseries from 2001, Band of Brothers.

You’re proud of me, right?

OK, yes, so I stalled on this for a while. I made my original commitment when I introduced DVD Flashback Friday back in May of 2010. It was supposed to be one of my summer projects and I never got around to it. Then in April of 2011 I once again promised to watch it, I was encouraged to do so by readers and friends and, once again, failed. But enough about how I’m a walking disappointment. I finally watched it over the holidays, so let’s talk about it!

What changed the most for me was probably that my boyfriend loved the miniseries and owns it on DVD. And after recently convincing him to watch five seasons of Friday Night Lights because I love it and can’t date anyone who doesn’t understand that my one and only role model of a functional marriage is that of Eric and Tami Taylor, I thought I’d do him a solid and agree to watch something that he’s a fan of. I’m pretty sure the way it works is that we watch five things I love followed by one thing he loves. Sounds fair, yes?

Band of Brothers has ten episodes, each an hour in length, so it’s not too huge a commitment. You could do it in one sitting on a snowy Saturday. I was only able to watch a few episodes at a time because too much war makes my head hurt. The miniseries is about WWII – specifically the experiences of “Easy Company”, a group of soldiers who had the terrifying job of parachuting into hostile territory. If you’re a history/war nerd, you will enjoy the depictions of various well-known battles, like Normandy, Bastogne and the taking of Hitler’s mountaintop retreat known as the Eagle’s Nest. But if you’re not a history buff or war junkie, you’ll still find the miniseries engaging and fascinating. 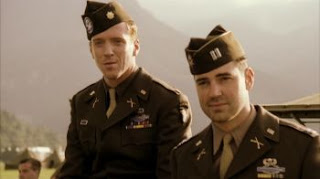 Focus tends to shift between characters, which is a double-edged sword. On the one hand, it can be captivating to see the war from a new perspective. On the other hand, it can prevent the viewer from developing a relationship with the main characters. Obviously, you’re “rooting for” all of the soldiers – but it’s a war miniseries, so obviously lives will be lost. What I found was that I wasn’t really pulling for anyone in particular. There were a couple characters I had more of a vested interest in, but you don’t feel like you know any of them that well. The main character, Dick Winters, is likable, but even by the end of the series I didn’t feel like I really knew him. There isn’t a lot of information about these guys’ lives back home – the focus is on the bonds formed between them throughout the course of the war. 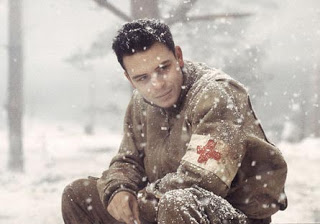 That said, it’s still an excellent series that I’m glad I finally watched and a few of my favorite episodes came courtesy of that shifting perspective. The sixth installment, “Bastogne”, focused on a medic named Eugene “Doc” Roe and I found the insight into his role in the company to be really interesting. However, after the episode concluded I found myself wishing they’d spend more time with him. 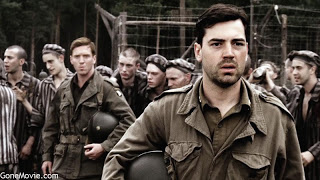 The penultimate installment, “Why We Fight” was probably the most powerful for me. The men came upon a concentration camp that had been abandoned by German soldiers. Growing up well after the war and having somewhat of an interest in the Holocaust as a kid (Did anyone else read Number the Stars by Lois Lowry as a kid? It’s what sparked my interest.) I’ve always been away of these atrocities. But the soldiers fighting against the Nazis really had no idea what was going on, that information wasn’t available. They were just doing their jobs. It was a fascinating episode to watch.

At the time it was created, Band of Brothers was the most expensive miniseries made, and you can tell. Each installment is like a movie, and the battle scenes are astounding. The executive producers were Tom Hanks and Steven Spielberg, so there was some serious talent responsible for the series as well. Each installment begins with interviews from surviving members of Easy Company, and there’s also a documentary you can watch. 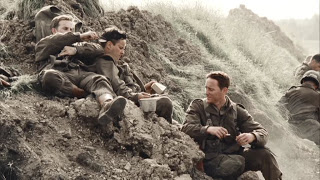 The acting performances were also great, with a few actors that you’d recognize. I found it hard to take David Schwimmer seriously in his role because his persona is so tied to his character on Friends, but luckily he mostly only appears in the first episode. There’s a brief appearance from Jimmy Fallon, which delighted me. Scott Grimes, who you might know as Archie Morris from ER has a large role, Tom Hank’s son Colin appears in an episode, and Donnie Wahlberg, James McAvoy, Simon Pegg and Michael Fassbender have roles. The lead, Dick Winters, is played by Damian Lewis who now stars with Claire Danes on Homeland – a show that’s been added to my list of things to catch up on.

All in all, I felt like that standout character in Band of Brothers was not any of the men, but the war itself. While there were flaws in character development, it was an extraordinary depiction of a fascinating and shameful time in human history and it did an admirable job of portraying both the intense violence and intense bonds that occur in battle.