I recently read an insulting piece of writing that suggests that anyone not interested in watching NBC’s new sitcom Whitney is an uptight comedy snob who refuses to enjoy anything that’s done in a multi-cam format with a laugh track. Either that or they’re jealous of Whitney Cummings’ beauty and success. But it can’t be because the commercials made the show look painfully dated and cliche.

Well, Whitney showrunners, I’m here with my recap of the two premiere episodes of The Big Bang Theory to prove you wrong. Sure, I don’t generally enjoy laugh tracks. (It was my major complaint about 2 Broke Girls) and I appreciate the offbeat humor of Community and the mockumentary style of shows like Parks and Recreation, Modern Family and The Office. But I also thoroughly enjoy The Big Bang Theory, a traditional multi-cam, laugh track, Thursday night comedy. I’m not jealous (well, not so jealous that I can’t watch her show, but I’d totes love to be her) of the beautiful and talented and funny Zooey Deschanel, who’s experiencing success (so far) with New Girl. So, you know, suck it. 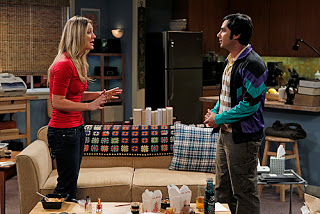 The first episode of The Big Bang Theory picked up right where the season finale left off – the aftermath of Penny and Raj’s drunken dalliance. The couple had very different reactions – Raj thought they were in love, Penny was humiliated and guilt-ridden.

I loved how this tryst played out. First of all, they didn’t have sex. They were going to, but Raj, uh, blew it when Penny put the condom on. Such a perfect storyline twist. But Raj was still in major trouble with the whole boys – Leonard was mad because, obviously, Penny’s his ex, and he spilled the beans to Howard that Raj had been harboring a secret crush on Bernadette. And then, of course, Bernadette was furious, which made for a very funny scene where she confronted Raj. And Sheldon spent the first half of the episode trying to figure out what “It’s not what it looks like” meant.

I wasn’t sure the episode would have room for the paintball storyline, but it ended up tying everything up perfectly. Sheldon may have only sacrificed himself because he wanted to beat the geology department, but it ended up bringing all the guys back together.

Overall, I thought it was a really solid episode with only a few flaws – I don’t love that Raj still has to conveniently have a beer in his hand every time he wants to talk to a woman, and I’m an even lesser fan of Leonard and Priya long distance than I was before – but I enjoyed it. Here’s a few of my favorite quotes: 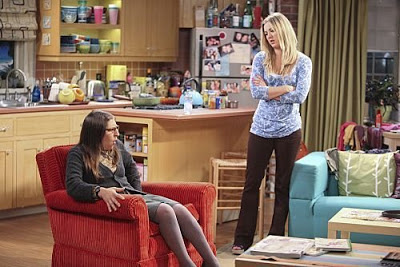 I think I enjoyed the second episode even more because it brought Penny and Sheldon together. Anytime that happens, I’m happy. This especially made sense since Penny likely wanted to avoid the other guys, and Sheldon was driven out of his apartment by Leonard’s attempts at keeping the long distance spark alive with Priya.

Penny had a new chair that Sheldon loved, until he found out she’d gotten it off the curb. Ew! I would have reacted the same way. Once, I found out a friend had purchased used furniture and I never stopped being afraid of catching bedbugs.

I loved how Sheldon managed to involve Amy in his argument with Penny over getting rid of the chair, because I love her relationship with Penny so much and it was fun to see her allegiances tested.

My least favorite part of the episode was the stuff with Leonard and Priya. I still don’t see any chemistry between them and I hate how Priya seems to look down on Leonard. Their technical difficulties didn’t even make me crack a smile. I really hope that relationship fizzles, since I think Leonard was at his funniest when he was with Penny.

I’ve long thought it was time Penny saw some professional success on this show, so I was really happy when she found out she’d gotten a commercial (not a great one, but still) and decided not to move back to Nebraska. I knew she wouldn’t actually move, but I  do think Penny’s life had come to a bit of a standstill. Booking a few paying gigs as an actress could make for some funny storylines and would give her character a much needed shot of self esteem.

And my favorite part of “The Infestation Hypothesis”? Raj and Howard carrying the actually infested (with a rat?) chair from the curb where Penny dumped it to Sheldon’s own apartment. Poor guy.