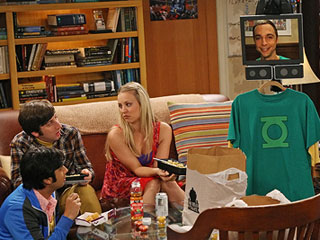 Maybe it’s just me, but I kind of expected this episode to be funnier. I mean, it sounded like it was going to be hilarious. Sheldon tries to extend his anticipated lifespan by changing his eating and exercise habits. Cue hilarity. But instead, the episode felt like it missed out on the opportunity for a lot of good jokes. It just felt average.

Sheldon took many factors from his family history into account to determine just how long he’ll live – sixty years to many, in Leonard’s eyes – and realized he was just falling short of the first projected occurrence of The Singularity. No, not a crappy Tom Cruise movie – it’s the point in time when humans will be able to transfer over all their knowledge and attributes to robots. Or something. Determined to make it to that point so he could live forever as a robot, Sheldon decided to start taking measures to extend his lifespan.

First he passed up pizza in favor of his new “cruciferous vegetable night” and then he tried to go jogging with Penny. This should have been hilarious – just watching Sheldon try to touch his toes had me giggling – but it ended early when Sheldon fell down the stairs. Really, Big Bang Theory? What a cop out! I wanted to see Sheldon run! There was also more than one fart joke, which seemed beneath this show. I have spent many an hour…OK, more like many a minute or so defending The Big Bang Theory to people who have deemed it low-brow comedy. The laugh track or live audience or whatever it is makes my case difficult, and the fact that they resorted to fart jokes TWICE in this episode has all but destroyed my argument.

Sheldon decided that the outside world was far too dangerous if he wanted to make it to The Singularity, so he decided to live the rest of his life from the comfort of his bedroom and send around a robot in his place. This was funny, but for some reason the robot scenes just didn’t really do it for me. Perhaps it was because, as Penny pointed out, the robot was not all that different from Sheldon himself.

In the end, Sheldon abandoned his robot in favor of getting his vintage Apple computer signed by Steve Wozniak, his 15th favorite technological mind. (That’s still six spots ahead of Steve Jobs.) He immediately fell down the stairs and smashed the computer, meaning that he wasn’t entirely wrong in thinking the outside world was too dangerous for him.

Here’s some stuff from the episode that did work: