Home / Life / Couchtime With Jill / The Big Bang Theory: You can checkout any time you like, but you can never leave 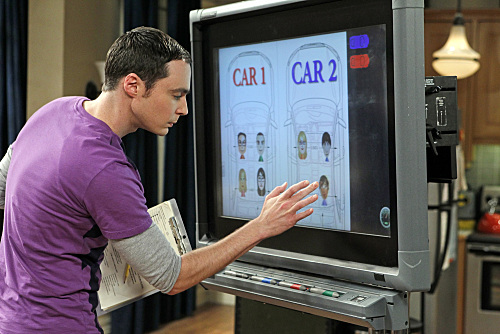 The Big Bang Theory: You can checkout any time you like, but you can never leave

I’m just gonna say it – best episode of The Big Bang Theory so far this season? For me, this episode proved that recent additions to the cast (Bernadette, Amy Farrah Fowler) are working for The Big Bang Theory. This was a wildly funny ensemble episode that made great use of every single character. 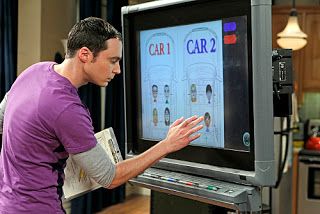 The whole gang, including Penny (free spa trip!) were headed to a Nerd Convention (OK, a science symposium) to speak on a panel. From the minute the episode started, where Amy asked Penny to attend as her plus-one (because, according to Amy’s blog, Penny is her best friend), I was laughing. You can’t put these people in a car together and not have hilarious things happen. Sheldon’s walkie-talkies? Howard and Bernadette singing “I Got You Babe”? Raj texting Leonard in the other car to ask him to call Bernadette and tell her that when Howard says “napping” he means “having sex”? All fantastic. 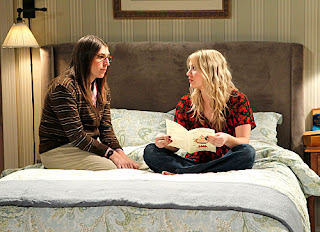 In particular, I think this was a really great episode for Any Farrah Fowler, since it built on what we’d learned about her character in the episode where she, Penny and Bernadette had “girls’ night”. Up until then, Amy was like a female version of Sheldon. But now she has something that completely sets her apart, which is her total desperation to have a friend. Sheldon tolerates people, especially Penny. Amy overlooks Penny’s lack of intelligence (by their standards, anyway) and is basically dying for them to be friends. And that’s a fresh and funny dynamic. 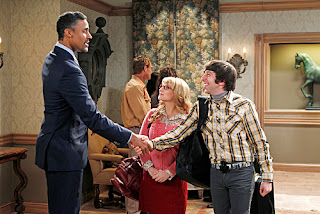 Things got even more hilarious once everyone arrived at the hotel. Bernadette ran into her ex, played by the dashing and towering Rick Fox. Not only did he intimidate Howard, but he surprised him. I actually gasped when Howard said he thought a guy like him dating a girl like Bernadette would never have to worry about competing with a guy like that. And the insanity began.

Bernadette had to crash with Penny and Amy because Howard is a jerk. But Amy was having night terrors, so she came knocking on Leonard and Sheldon’s door. Sheldon was worried the two might engage in coitus, so he bailed and went to Raj, who’d just jumped into bed with a box of tissues…to watch Bridget Jones’ Diary. That lasted all of two seconds before Sheldon kicked Raj out of his own room and sent him back to Leonard’s, where the poor guy was about to score with Penny. 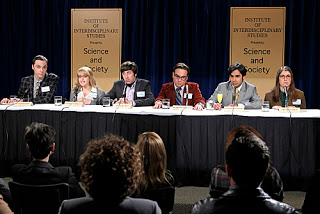 The panel the next morning, of course, was a disaster. All the references to whether Bernadette was interested in big missiles or tiny organisms were made even more hilarious by Sheldon’s utter confusion.

Other funny moments from “The Love Car Displacement”: