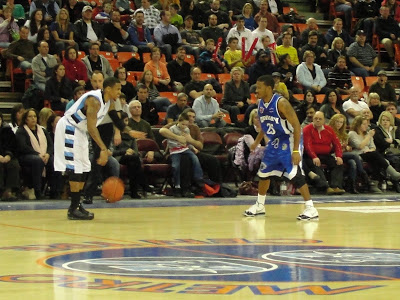 RAINMEN 102, CAVALRY 92
Rainmen Record: 4W – 1L
4 in a row.
The Halifax Rainmen got their revenge on the Lawton-Fort Sill Cavalry last night at the Halifax Metro Centre defeating the Lawton-Fort Sill Cavalry 102-92.  Tony Bennett took over in the final quarter where he scored 12 of his 24 points as Halifax won their fourth game in a row since their lone loss against the Cavs back on January 3rd.
Halifax came out strong and built a 12-point lead after the opening quarter but quickly went cold in the second as the Cavs got back into the game with a 14-2 run to start the second quarter.  By the half, the Cavs had knocked down the Rainmen’s 12-point lead to just three points.  Halifax traded the lead with the Oklahoma team in the third quarter until Halifax closed it out in the final 12 minutes.
Gary “G-Smooth” Ervin, a former NBA D-Leaguer and starting point guard for Halifax, had an impressive performance for the Rainmen, scoring a season-high 18 pts but also pulled down a whopping 16 boards, which was another season-high for the guard.  Desmond Ferguson scored 22 points and drained 5 threes to help the Rainmen raise money for Haiti disaster relief (the team donated $300 for each Rainmen three-pointer from last night’s contest).  Halifax made 13 threes which accounted for $3900 going toward the cause.
For the Cavs, Shaun Fountain led the team with 20 points followed by Tim Ellis who scored 17 points.  DeAnthony Bowden, who was the Cavs’ leading scorer was held to just 11 points.
Cavs’ Michael Ray Richardson was comical to watch from the sidelines as the animated coach made no attempt to ignore the Halifax hecklers.  Richardson kept the spectators entertained as he continued to talk to the crowd (and John Strickland, who played for Richardson with the Albany Patroons) throughout the game.
Shaun “Mavs” Gillis & Ryan Dickison Player of the Game:
Gary Ervin 18 pts, 16 rebounds, 3 assists
Romy Aquino’s Player of the Game:
Tony Bennett 24 pts, 6 assists, 5 rebounds
Hat-tip to the Cavs:
Tim Ellis  17 pts, 8 rebounds, 2 blocks
Key Notes:
Post Game Links:
The Chronicle Herald

“…But Friday night’s victory in front of 3,262 spectators at the Metro Centre was especially sweet, avenging a season-opening road loss to the Cavalry.”

“Point guard Gary Ervin had another big game, hauling down a whopping 16 rebounds to go along with 18 points, while Eric Crookshank had yet another double-double with 13 points and 18 rebounds. Desmond Ferguson hit four of his five three-pointers in the first quarter en route to a 22-point outing and Marc Mazur logged some key minutes at centre and had 10 points.”

“The team also struck 13 three-pointers, good for $300 a piece for Haiti disaster relief, for a total donation of $3,900 by Team Owner Andre Levingston.”

Next up:  The Rainmen are on the road for two games.  Once against Manchester (this Sunday) and then again for a game against the undefeated Puerto Rico Capitanes (next Thursday) before returning back home Sunday to face off against Rochester.
Will the Rainmen go 2-0 on the road? 1-1? 0-2?
Post your thoughts in the comment section below!