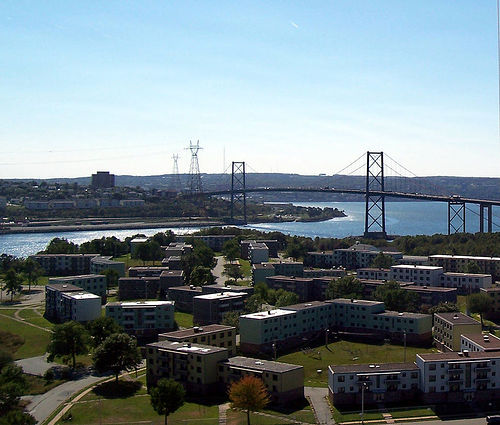 I'm not an expert, I haven't been following all the public discussions regarding a new stadium. I'm just a guy with an opinion. The HRM needs a bigger venue. A BIG bigger venue. A place that can house not only sporting events, like the Woman's World Cup, but concerts. Lots of concerts.

A facility like this reminds me of the same buzz around the Toronto SkyDome. For those not in the know, it is a 500 Million dollar facility that was built downtown Toronto in the late 80s. Built to house both the Blue Jays and the Argonauts sports teams, it was a massive undertaking at the time. Pundits called it an, "Oversized playground". To me as a teenager growing up in southern Ontario it was amazing. Not only did I spend many a night at concerts, and watching the Jays lose, but seeing that incredible dome at the base of the CN Tower was dreamlike to me. It will sound silly, but to me it was symbol. A symbol of how successful and strong the city of Toronto is to a starry eyed 18 year old.

I recently read (skimmed) a report put out by the Halifax Regional Municipality that recommended that the location of the stadium would be well suited in Dartmouth Crossing. Initially I was excited that a Dartmouth locale was being considered. But then it dawned on me. Why Dartmouth Crossing? Why hide an amazing facility out in the middle of nowhere?

This brings me to my first issue. Location, location, location. Why hide such an impressive facility in the middle of an industrial complex? Show it off! I can't think of a better addition to the Harbour skyline than a beautifully designed and executed stadium. The first locale that was in my mind was Shannon Park on the waterfront. It has the space, the infrastructure of city and water in place, parking, access to highway, bus service, and pedestrian friendly, the works. Check out this great article by local blogger, Bill McKinnon, which does a great job at nailing the pros and cons of the stadium location.

Secondly, Is it big enough? Yeah baby. Go big or go home. This new facility is estimated to be able to seat 14,000 with an estimated temporary expansion to 20,000. While this seems like a big number it doesn't seem impressive to me based on what we already have access to. The Halifax Metro Center is listed as having ready access to up to 13,000 seats. Why build a facility that only houses slightly more? This is barely the minimum requirements to host the FIFA Women's World Cup. Isn't it time we stop being so conservative and go for it? Let me oversimplify this. A larger facility will house bigger and better events. With bigger events comes bigger money. Increased tourism. More money. Win. Where's the money going to come from? No idea. But didn't we recently throw away nearly 400,000 at a fake concern promoter recently?

I for one, am tired of standing in the rain. I think it's time we show a little pride. Be boastful. Build an ungodly huge stadium, get it on the waterfront and get some top A performers to perform. Maybe get our own NHL or MLB team. A guy can dream can't he?

What are your thoughts ? Chime in below or tweet your response @thedeeside

The big picture on the Halifax (Dartmouth) Stadium : Are we not thinking big enough?
https://haligonia.ca/the-big-picture-on-the-halifax-dartmouth-stadium-are-we-not-thinking-big-enough-50094/