We’re counting down to one last week of vacation posts before what I’m sure is the much anticipated food wrap-up post and then it’s back to regularly scheduled blogging. 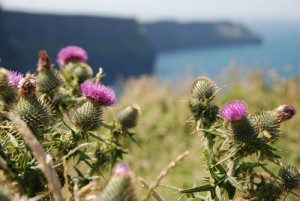 On our last day in the west of Ireland, we started off by visiting the Cliffs of Moher which stretches for eight kilometres and rises up to 214 metres above the Atlantic Ocean. Living on the East Coast of Canada, I couldn’t help but notice the striking similarities in landscape, particularly with Newfoundland.

One of the great things about the Cliffs as a tourist attraction is that a great deal of attention was paid to the environment. The Cliffs of Moher Visitor Experience and shops is built into a hillside approaching the Cliffs, blending in like a set of Hobbit stores.

For the most part, visitors are safely enclosed by stone slates that are put up as natural barriers around the cliffs. However, there’s one area marked off by a giant sign warning tourists to not venture further, that is completely untouched. Of course, plenty of people ignore the warning to walk along a well-worn path next to the sharp drop into the ocean.

Fun facts: The Cliffs of Moher were featured in The Princess Bride (remember the Cliffs of Insanity?) and more recently in Harry Potter and the Half-Blood Prince. 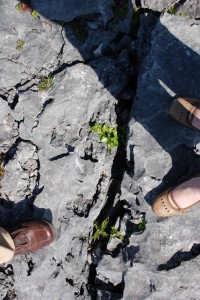 A rare sighting of Cokebaby

Next on our day trip was a scenic drive around the Burren (a name derived fittingly from the Irish word bhoireann meaning “a stony place”). The area is approximately 300 square kilometres of limestone and described by the men in our group as looking similar to moon rocks.

What’s fascinating about the area is the stark contrast of barren rock and the wide variety of the most unusual and rare plants that we were fortunate enough to see at this time of year.

We also saw the Poulnabrone dolmen, a Neolithic passage tomb whose name literally means the “hole of the sorrows.” This experience was to be just a taste of what was to come in terms of ancient burial rites when we would visit Newgrange later in our trip.

Thus ended our stay in Limerick and the surrounding area. For the rest of the vacation, whenever we mentioned we had stayed in the place known as stab city people would remark, “And you survived?” I guess all I can say to that is: Yay, us!?

Up next: The Rock of Cashel, Dublin and a tale of two Guinness.

The Cliffs of Moher, Burren, and escape from stab city
https://haligonia.ca/the-cliffs-of-moher-burren-and-escape-from-stab-city-4618/