I’m really looking forward to Monday. (Who says that?)

Monday is election day in Canada and we get to elect a new federal government. It is pretty darn exciting actually.

I have no idea when elections became exciting to me. Initially, I think I enjoyed voting day because it was something new – a break in the monotony. I recall being a teenager and watching the results on television. Or maybe I was just old enough to vote at that time. Maybe that is when I started to become invested. The simple act of voting made me feel ownership over the outcome and so I watched the coverage intently.

Every election since has gotten better. Each year I find myself more invested in politics. I married a man who finds politics fascinating and some time after that I realized I didn’t need to share his, or my parents’, political views. Part of coming into adulthood for me was discovering my own political opinions and deciding where I stand on issues while finding the voice to argue and articulate my own opinion. 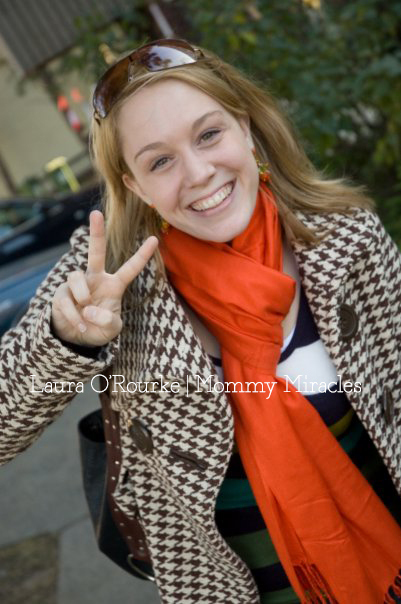 I am engaged. I am political. (see photo above. My first voting selfie. Not to be confused with my first time voting.)

I am also 29 years old. From at least one source who classifies “young voters” as 18-30 year-olds, this is likely the last election where I will be classified in this voting demographic. This demographic rarely shows up to the polls. I have bucked the trend and voted in every single election since I have been eligible. There have been some elections where I have felt very uninformed going into the polling booth. There have been others where I have felt incredibly aware. Either way, I voted.

If someone votes, their likelihood of voting in the following election goes up, which is one of the reasons why it is so important to get first time voters out to the polls. I would argue however, that creating lifelong voters starts long before a child turns 18. I know for a fact that it is possible to engage younger citizens – even the toddler variety.

How to Throw a Kid-Friendly Election Party 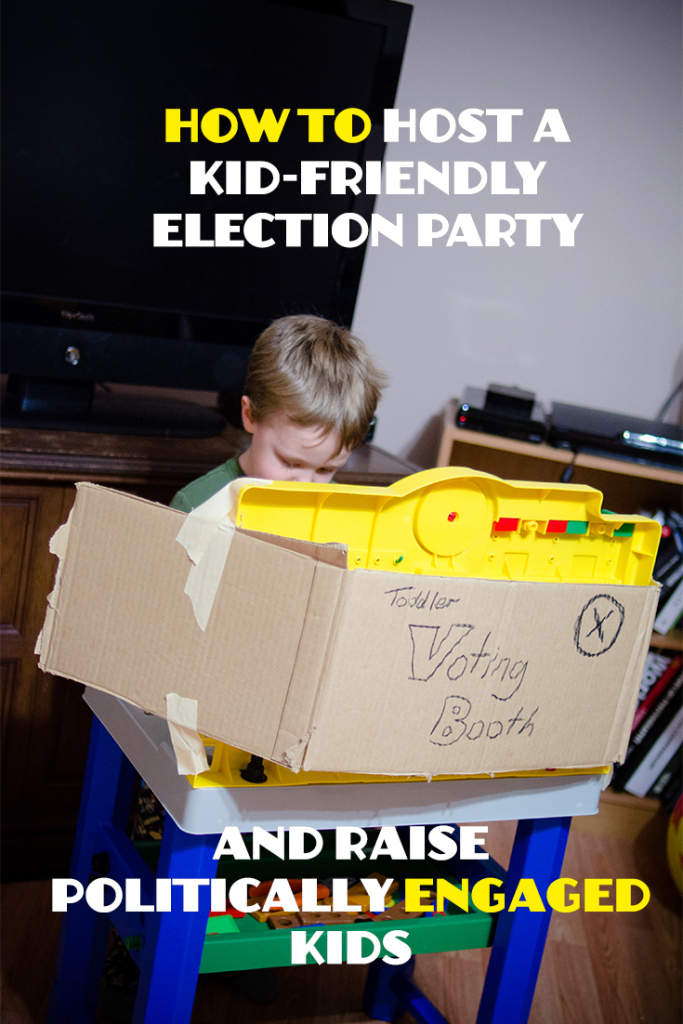 I last voted two years ago in our provincial election. That was also the first year we really started our election night tradition of making voting day a big deal in our family. Instead of voting early or online, Dan and I went to the polls together with the kids. They witnessed the whole process. They joined our post-voting selfie. When we got home, the kids found their own polling station and ballot box set up and ready for them to vote.

We actually started this process as soon as the election signs went up. The bright colours are so easy to spot and identify that it is actually the perfect opportunity to introduce politics and democracy to our little ones. Then, and again now, my kids picked out the election signs and called out the “team” colours. “I see red team!” they tell me as we drive by. The best is when they see all the signs in one place – red, orange, blue and green. “I see ALL the teams!”

Sure, at this age they’re just choosing based on colour preference. They can’t understand policy at this point. (They do however understand that it is problematic that there aren’t as many girls as there are boys in our government.) But they can still begin to understand what it means to engage in a process that creates a result. When it comes time for them to vote as new adults, elections will be part of their lexicon.

Once the kids are engaged and invested, it is time for them to vote.

It is easy enough to create ballots for your family to fill out. Use letters and colours to make sure all age groups can clearly know who each choice is. Make enough for each member of the family (even the adults can vote again). 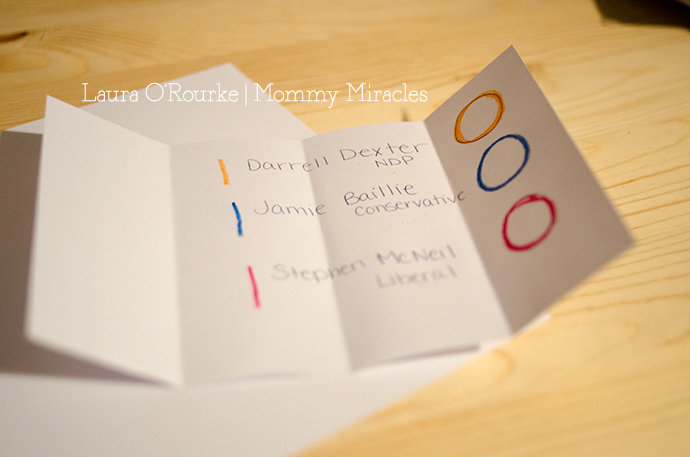 With cardboard or bristol board, set up a privacy voting booth and stock it up with crayons or markers or pencils. Now is a great time to start practicing printing the letter X. 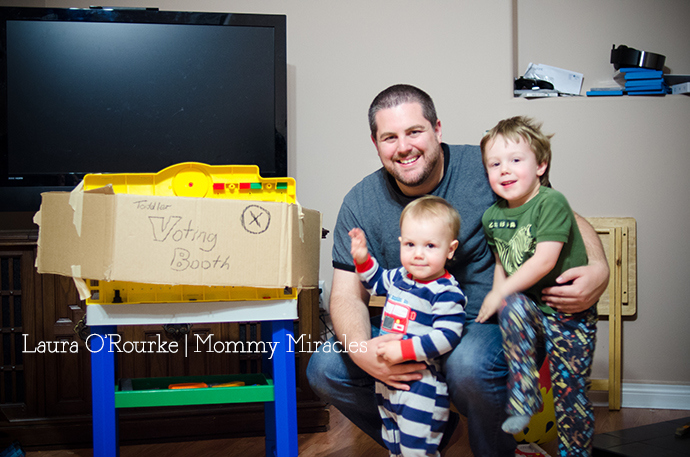 Prepare a ballot box. Any container with a slot will do. We used an empty tissue box. Putting your ballot into the box is super fun, so make sure that process is strictly adhered to. 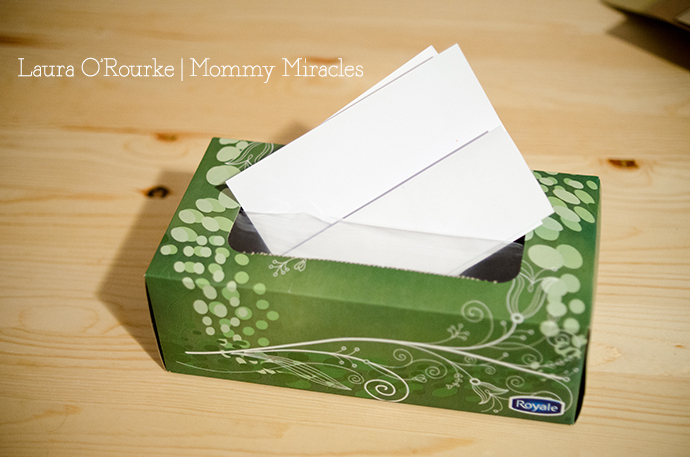 Have appropriate snacks on hand. Consider choosing snacks that fit the voting theme. A good idea is to pick candies that are coloured according to each party. Red, Orange, Blue, and Green. Remember that as a polling station, you must remain non-partisan so be sure to have all the colours. Don’t worry. Even if your child’s favourite colour is blue, that doesn’t necessarily mean he’ll be a Conservative for life.

Count the votes. Declare the winning “team” colour. Remind children that just because a certain person won in our house, it doesn’t mean they will necessarily be forming the next government of Canada. Remind yourself that you are still in charge of your household budget, debt levels, education choices, childcare options and household transit. Wonder why no one voted for you since you’re obviously doing a bang up job leading your family.

Put your kids to bed and drink wine with your husband. Watch the election coverage. Refuse to go to bed until the very last ballot has been counted in British Columbia. Unlike your household poll, this one really is real and you’re stuck with this government. Sorry.

The post The Family Who Votes Together appeared first on Mommy Miracles.

The Family Who Votes Together
https://haligonia.ca/the-family-who-votes-together-112499/