Jill writes about a lot of shows, but she doesn’t always write about the ones that I watch. And this is a problem. Because it means you might not be watching these shows. And you should be. Not because they’re spectacular TV of the FNL variety, but because they’re damn enjoyable and might even be full of cute boys.
And missing out on cute boys is a bad thing.
And the clothes are really darn cute too.
I’m getting my fix of both thanks to ABC Family.
The Nine Lives of Chloe King – season one, ABC Family (Tuesdays – but I want it daily. For reals).
The premise of this show is straight up ridonk. But you guys? I am ADDICTED. Seriously. I can’t wait for new episodes. I’m all swoony for Chloe and Brian because he’s so darn cute and she can’t kiss him or HE WILL DIE. I mean, if that doesn’t kick the ass of Buffy/Angel, I don’t know what will. Because at least Angel just turned evil after they did it.
But let’s back this up.
The titular Chloe King has just turned 16. And weird shit starts to happen on her birthday. Like freaky balance. And supersonic hearing. And some weird empathy thing where she feels what you’re feeling. And claws. And a scarfaced dude who tries to kill her. Actually, he totally does kill her. He pushes her out of some huge tower in San Francisco. But she gets back up again and her massive bruises are gone by the next day.
What up Chloe King? Oh hai, I iz a cat person.
Turns out Chloe belongs to an ancient race of cat people called the Mai. And the Mai have been on the downlow for a real long while humans in a secret society hunt them down. The humans thing the Mai are out to kill, but the Mai are just misunderstood. In the meantime, the Mai are biding their time waiting for The Uniter to come along. The Uniter is the only one of the cat folks to literally have nine lives and who can bring everyone together. This Uniter would be 16 year old Chloe King.
Except, Chloe didn’t know any of this. She just thought she was a normal girl. Because, you know, her parents aren’t cat people. But the thing is, maybe they were – because Chloe was adopted from the Ukraine. And we later learn her family was totally massacred (although she doesn’t know this yet. So. Many. Secrets.) Chloe lives with her single mom, her dad is MIA (but has been sending her mysterious emails), and figures she shouldn’t tell her mom about the cat stuff. Which is probably a reasonable thing to do. Except her mom just knows something is up with Chloe. Drugs? Boys? Dad who mom thinks is dead but isn’t?  Parents never guess that they’re daughter is part cat.
So, after Chloe loses her first life, random British dude (Aleck) in her high school and his hot lady friend (but not girlfriend; Jasmine) show up to give her the skinny on being part cat. Because they’re also Mai. And their leader is Jasmine’s mom. And they’re sworn to protecting Chloe and training her to be a super awesome cat person (because she’s the Uniter and this is going to be Important at some point in the series).
So now Chloe has kitty superpowers, but they come with one huge downside: she can’t kiss or do anything with human dudes or she’ll kill them. She’s already killed one dude by kissing him (before anyone told her about the deadly kiss business). Luckily for my Pretend Boyfriend Brian (yes, that is Hastings Ruckles of FNL), they told her before she kissed him.  And now the other Mai are all, “no human boys! No human anythings! You need to Focus on Being the Uniter!”
But, being 16, Chloe isn’t awesome at following orders. She keeps getting into all kinds of life threatening hijacks, some of them organized by Brian’s dad (the plot thickens!) and she keeps seeing Brian, even though she can totally kill him. But it’s all swoony and unrequited because he totally likes her and she totally likes him, but no kissing happens.
So why am I watching this show.

1. Brian + Chloe = swoonfest. They want to be together, I want them to be together, but they can’t and it’s all unrequited and swoony. Sometimes he’s a bit pouty, but considering she hasn’t told him why she won’t kiss him, I’d say it’s fair (he thinks she’s just being lame and 16).

2. The premise is dumb, but there’s something seriously catchy about it. Like Buffy. Because as much as everyone loves that show, let’s face it, the idea of a vampire slaying cheerleader is dumb (see film, Buffy the Vampire Slayer starring Luke Perry). I’m not comparing this to Buffy, I’m just pointing out that it’s not so dumb for me to like it.

3. But if I was going to compare the two, I sort of could. She’s 16, a badass fighter, trains for fighting at night, has two BFFs in on the secret, single Moms is out of the loop and there’s a hot guy she can’t be with but wants to be.  If the writers could up their sassy quips during fight scenes, Chloe could totally hold her own against Buffy.

4. Chloe’s BFF has the cutest outfts.

6. If he’s your type, the Aleck dude is not hard on the eyes either. If only he could downplay the douchebaggery.

7. Chloe can kiss Aleck, but she can’t kiss Brian, so there’s all kinds of bizarre love triangle action happening.

8. You actually kind of care about what happens to Chloe. She could whine a heck of a lot more about her new lot in life, which would make her a hell of a lot less sympathetic. But no! She’s kind of sassy. I mean, when Aleck is all, “I save your life repeatedly! You should want to make out with ME!”, Chloe is all, “hold up buddy, I don’t owe you shit in the make out department.” And you kind of want to cheer for her.

Like I said, it’s straight up ridiculous, but I love it so much these days that I had to write it out as a guest post for Jill. Because I can’t share it with my co-workers or the husband. I have a feeling they just won’t understand my love of the teen TV. And yes, the plot is ridiculous. But I recall another ridiculous plotline that got people going. I mean, cheerleader who is a vampire slayer living on the mouth of hell? Right. So let’s give this a chance and ignore the fact that it’s on ABC Family. 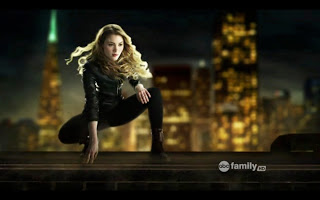 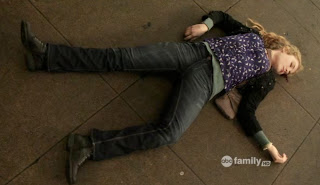