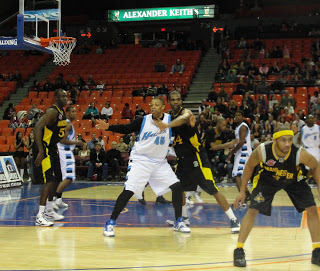 Just like the Buffalo Stampede last week, the Manchester Millrats rolled into Halifax with tired legs and a shorthanded eight-man roster.  The Millrats, who had played Saturday afternoon against the Quebec Kebs, came to the Halifax Metro Centre for their second matchup in two days.  Halifax pounced on the Millrats’ tired legs and built a commanding 33-17 lead in the opening quarter.

The Millrats bounced back in the second quarter, going on a 12-0 run to get within seven until Halifax’s Tony Bennett ended the run with a three with 2:59 to play in the half.

The Rainmen regained control in the second half when they outscored the Millrats 55 to 44.  Halifax’s offense was too much for the Millrats as they had no answer for Rainmen guard, Tony Bennett.  Bennett finished with season-highs in both scoring and rebounding with 32 points and 8 rebounds. The win over the Millrats is Halifax’s sixth straight home win as Halifax still holds an unblemished home record.

Eric Crookshank was impressive on the glass, grabbing 19 boards to go with his 18 points.  And as much as the Millrats defense tried to defend their former player, Desmond Ferguson, Ferguson dropped 14 points on his former team.

For the Millrats, Charles Bronson put together a double double with 20 points and 12 rebounds.  Dwight Brewington, the league’s only deaf player, chipped in with 16 points.

“The Rainmen stayed perfect at home on the PBL season, pushing their second-place record to 8-2 at the halfway mark with a 104-83 win over the Manchester (N.H.) Millrats before an estimated 2,500 fans. It was the sixth straight home win for the Rainmen and third on their current five-game homestand.”

“Tony Bennett had a huge game for the Rainmen, racking up 32-points, 20 of which were scored in the second half. Eric Crookshank was strong off the boards, pulling down 19 rebounds, while adding 18 points. The Rainmen started fast in Sunday’s game with 33 points in the first quarter and never looked back.”

“The Rainmen are 8-2 and pushing for their first Premier Basketball League playoff spot. The Millrats, a PBL semifinalist last year, are slipping further out of the race at 3-8.”

The Rainmen are back in action this Saturday when they face off against the Maryland Greenhawks here in Halifax (Watch it live on Haligonia.ca!)