Growing up, the Bird children have what can only be described as the perfect childhood. Living in an idyllic country home in the English Cotswold Village, their unique and happy-go-lucky mother, Lorelai, works to ensure that her children know they are surrounded by love and beauty and magic. This manifests itself particularly in their yearly Easter Sunday celebrations, with a garden-wide egg hunt and a lamb dinner for family and friends. Lorelai is also rigid about preserving memories – the walls of their kitchen are covered floor to ceiling with drawings that the kids have made over the years, and she makes sure to save every foil wrapper from every chocolate egg. 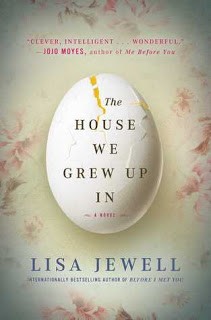 As they reach adolescence however, things begin to change. The oldest daughter, Meg, becomes increasingly disenchanted with her mother’s carefree attitude and desire to hold onto things. The twins, Rory and Rhys, are growing apart as their personalities take very different turns, and middle child Beth is troubled by Rhys’ attitude. This all culminates in a tragic event that becomes the catalyst for the family’s unraveling.

This story is told through a series of vignettes that take place on various Easter Sundays throughout the family’s history, and is supplemented with current-day narrative told through Meg’s eyes. In 2011, Meg is returning to her family’s home for the first time in years, where she discovers the reality of her mother’s hoarding disorder. Her siblings and father soon join her, and they slowly begin to uncover and work through what really happened on that Easter Sunday so many years ago.

Character-driven and compelling, this novel is typical Jewell. It takes you on a ride through the Bird family’s drama and shows how secrets can ruin even the strongest of relationships. However, despite the story’s many twists and turns (death, mental illness, marital affairs, and familial backstabbing included), Jewell is never heavy handed or over the top. The way that the story is told, with the present and past intermingling, leaves readers anticipating the moments when secrets are revealed and things fall apart.

If you enjoyed The House We Grew Up In for its developed characters and family secrets, some other novels you should check out are:

The Hour I First Believed by Wally Lamb tells the story of Caelum and Maureen Quirk. After surviving the Columbine Shooting, the couple move back to Caelum’s childhood home. As Maureen experiences a downward spiral caused by PTSD that leads to a tragic car accident and jail time, Caelum finds himself delving into his family history and uncovering dark secrets that he never expected to find.

In Everything I Never Told You by Celeste Ng, the Lee family are shocked and devastated by the seeming suicide of their daughter Lydia. In the eyes of her parents, Lydia was a star student with lots of friends, but in the wake of her death they start to learn the truth – that Lydia was a loner who struggled through most of her classes. As they try to come to terms with their daughter’s death, they must also try to reconcile the girl they thought they knew with the person their daughter really was.

The House We Grew Up In by Lisa Jewell
https://haligonia.ca/the-house-we-grew-up-in-by-lisa-jewell-121865/