Since childhood, I’ve loved to spend hours sitting and walking by myself while imagining the many individual experiences that took place on the same ground that I am now on. An old mossy foundation, a path by the shore or a historic property in Downtown Halifax can provide me with hours of curious daydreaming. I’ve recently taken to sitting on Citadel Hill and picturing the hustle and bustle of the days gone by. When I saw the cover of Then and Now: following in the footsteps of Nova Scotia photographer Wallace MacAskill by Len Wagg it seemed to jump out of my imagination! It quickly became a cherished favorite of mine. 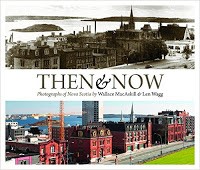 “In this remarkable collection of then and now photographs, Len Wagg follows in the footsteps of 50 of MacAskill’s best shots, recreating them in colour contemporary portraits. Through side-by-side comparisons, readers see how much has changed, and how much has remarkably remained the same” publisher

If you enjoy this book, check out Halifax: A Visual Legacy: 200+ iconic photographs of the city from 1853 to the present  by William D. Naftel. “This collection of “over 200 key images shows the building of Halifax” publisher.

A Halifax Boyhood: growing up on the city’s outskirts in the 1940s and 1950s by Malcolm MacLeod will also provide you with fuel for your imagination or memory as it “brings back the sights, sounds, and feelings of the era” publisher

A Portrait of Lunenburg County: images and stories from a vanished way of life  by Peter Barss “is a moving tribute to the warmth, humour, and vitality of a people whose lives have formed a rich and vital chapter in Canada’s past” and features photographs of local men who made their living from the sea.

Then and Now - dreaming of the past
https://haligonia.ca/then-and-now-dreaming-of-the-past-121863/