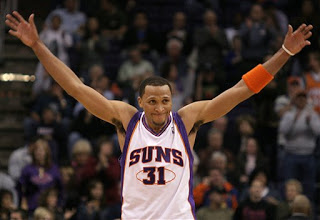 Raptors Trade for the Matrix
Remember when Shawn Marion used to be called the Matrix? For the past year, as his talents have been wasted in Miami’s slow down offensive system, Marion has simply been known as Shawn Marion.
It was only 2 years ago that Marion was one of the most exciting players on the NBA’s most exciting team, the Phoenix Suns. But ever since Steve Kerr jettisoned Marion, Mike Dantoni, Boris Diaw, and Raja Bell out of Arizona, Phoenix is a team in decline that will probably miss the playoffs, and Marion has dissapeared off the NBA radar.
Welcome back Shawn.
Today the Raptors traded for Marion, giving up underachieving Jermaine O’Neal and the hopeless Jamario Moon. Marion will be reunited with GM Bryan Colangelo, and will give the Raptors an immediate upgrade at their weakest positions, the 2/3 spot, so critical to success in today’s NBA.
Finally the Raptors have someone who can match up with other teams in the backcourt, and in the right system, is one of the best finishers in the game. I think the Raptors will be a good fit.

Is it enough to save the Raptors season? Who Knows. If the Raps were in the west, where Phoenix at 28-23 is on the outside looking in, the answer would be no. But in the East, where the Raps are 21-34 but still only 7 games behind 8th place Milwaukee, it could happen.
Marion has always had a reputation as being an unhappy camper, but after his 1 year exile to Miami, he should be rejuvinated and anxious to prove he’s one of the game’s 50 best players.

The Matrix coming to Toronto
https://haligonia.ca/the-matrix-coming-to-toronto-2005/