[Next up in this week’s series of East Coast Guest Posts comes from someone new to the city who very kindly agreed to share her experiences. While some of us know what it feels like to grow up in a city with our own cultural identity, here’s a little taste of what it’s like moving to a new one and trying to find balance.]

Gossiping with my sister and getting annoyed at my mother in my head, while walking down Spring Garden Avenue doesn’t really count as heritage or roots. What about lots of black Kohl? If you’re a teenager native to North America or Europe, it means you’re doing an alternative rebel look: you probably have a metal hoop in your pretty little nose and you’re wearing flip-flops. On the other hand, heavy eye-liner with orange-dyed hair, uncomfortable heely shoes and lots of heavy cleavage means one thing- Iranian ex pat woman alert. So I guess that’s part of my heritage that I’m trying to get away from: too fussy clothes and make-up. A little less lipstick and a little more beige. 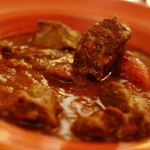 Food. My heritage. In one blog post, I rant about Iranian immigrants nostalgic for their mummies’ cooking, obsessive about recreating traditional dishes from dried herbs flown across the Atlantic or store-bought in Toronto. Yet the fact is, we eat Iranian at least three evenings a week. And the other evenings, we eat pasta, which certainly isn’t Canadian, last time I checked. Iranian food is cheap, it’s healthy, it’s more or less easy to make, and we know how to make it. It’s what we know and who we are. The Indian basmati rice we get at Superstore is better than any rice I’ve eaten in my home country, while my family obliges by sending huge parcel of dried herbs, turmeric, saffron, cinnamon and the other spices whose English name is unknown. On Sundays, I cook a traditional ‘khoresh‘, chunks of beef stewed with herbs, beans (pinto, red kidney, or split peas, depending on the type of khoresh), tomato paste (again, only used in certain dishes), and lots and lots of fried onions, spiced with sent-from-Iran packages. The stew is eaten with rice, and I cook plenty, ensuring enough leftovers to cover at least the next couple of nights. Back home, working mothers would cook their whole weeks’ supply on one day, divide into batches, freeze it, and well, you get the picture. By Wednesday, the kids are demonstrating for pasta. But by Friday, they are happy to indulge in home-made mince-meat kebabs with fried tomatoes.

Language. I make a point of talking to the kids in Farsi, even and especially when we’re outdoors. As my son is uncovering the joys of using rude words, it is particularly useful. But my daughter replies in English. In twangy, nasally, learned-in-Halifax Canadian English. “Farsi!” I screech at her. “We talk together in Farsi! We are not in daycare!” She is a good girl. She doesn’t challenge me, she doesn’t ask why, why, if I am so paranoid about learning and speaking Farsi, did we come to Canada? She speaks in a swirl of English and Farsi words. Gradually, the English words outnumber the Farsi.

She has forgotten her grandparents’ faces. They are too lazy with sending pictures. Last week was a special occasion, my brother’s wedding. They sent pictures. I showed them to my daughter. She stared at them. “I can’t remember their faces. Is this your mummy?”

My heritage, my roots. Forgotten faces. Surrogate food. Our roots are in that smoky veiled crowded city across the ocean. But our branches and leaves are spreading here, in this beautiful ocean town.

Shiva grew up in Britain, completed university in Tehran where she got married and had her two children, and she came to Halifax last year. She started doing a graduate course at Dalhousie, and so far, she likes it- both Dalhousie and Halifax. She misses home, which is Iran, but not enough to make her want to go back. She enjoys putting her children to bed, watching BBC costume dramas, pretending to write a novel, and pretending to study. Her blog is The Newcomer.