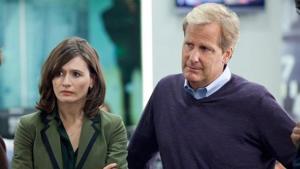 Last season, I had a lot of feelings about The Newsroom. Angry feelings. My reviews were more like weekly rants about Aaron Sorkin’s blatant sexism, criticizing journalism with 20/20 hindsight vision, too much self-importance, his hatred of the Internet, and other grievances.

I don’t know why I keep watching when I don’t really like the show. Why do people hate-watch anything, I guess? Seeing the news stories play out can be exciting, and getting all riled up over what the show COULD be (it has always had potential) is still entertainment.

That said, I found the season two premiere a bit confusing. The timeline was hard to get into, and I had a hard time getting back into the rhythm of the show. I also had forgotten how much I hated the Maggie/Don/Jim storyline, because Don is too unlikable and the other two too wishy-washy. All those scenes were dreadful.

Other news stories, like the drone strike and the emergence of the Occupy Wall Street movement, were very interesting to watch. I’m not giving up on this show, but I may not review it every week. What do you guys think – are you watching The Newsroom this season?