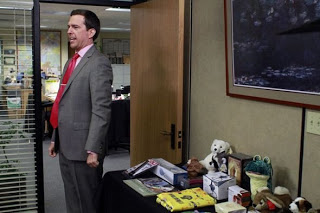 I’ve been sitting here with a blank screen for a while now (other than the two blog post titles I couldn’t choose between), because I’m really not sure what to write about Thursday night’s episode of The Office.

It’s not that “The Incentive” was bad, because it wasn’t. I definitely laughed. It just wasn’t great either. The first few episodes of The Office this season are about the show finding itself now that Steve Carell is gone – it almost needs to be treated the way you’d treat a show in the early episodes of it’s first season. It’s kind of in a wait-and-see stage.

The episode centered around Andy floundering under the stress of having to increase sales. He implemented a points-based rewards system, but the problem was that we didn’t really know how people earned those points. We only knew they would pool them until they hit 5,000 so that Andy would have to live up to his ridiculous promise to get a tattoo on his butt.

In the end, instead of forcing Andy to get a tattoo of a baby being birthed from his behind, they instructed the artist to do a cute little “Nard Dog” illustration. It was a fun enough storyline, just not the best.

The subplots also fell a little flat for me. I was expecting more from the idea of Angela and Pam taking twice-daily walks together, but the concept was abandoned almost immediately. And we never really found out what’s going on with Darryl and his ex, so hopefully the show ties up that loose end in a future episode.

That said, there were a few moments and lines that made me giggle. Check them out and let me know what you thought of “The Incentive”.