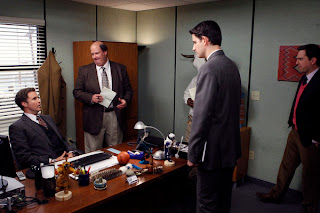 I was wondering how they’d get rid of Deangelo Vickers so quickly. I’d read that Thursday’s episode would be his last, at least for now, but as the minutes ticked by we saw no signs of why Deangelo would be leaving. In fact, I wish I hadn’t known that it was Will Ferrell’s last episode (Damn you, entertainment columnists who know everything and Tweet about it!) because without that information his exit would have been a hilarious surprise. The way it all went down perfectly suited the character – kinda ridiculous and stupid, but still completely funny.

I’m glad Will Ferrell wasn’t around for long. His character served a good purpose in reminding us how Michael Scott was not the world’s worst boss, and it’s good that it was a short-lived arc. Frankly, I’d be happy to see a few short term Michael Scott replacements. Maybe the position is cursed now, like being professor of Defense Against The Dark Arts.

I loved how unpredictable Deangelo was. Throughout his arc he had moments where he seemed great, moments where he was awful, and just completely ridiculous moments – like in the cold open where he angrily shouted a whole bunch of good news for people. Finally, making Deangelo a raging sexist was one of the best things the writers could have done, because it provided a lot of opportunity for everyone in the office to awkwardly interact, and also helped make Deangelo extra unlikable – and that was important, since I didn’t want to have to feel bad for him when he got hurt. I think my favorite part of the storyline was Andy’s initial rage over the sexism, followed by his total participation once he was included in the “inner circle”.

I loved Deangelo’s intense, inexplicable need to win over Dwight.He did everything, and the one thing Dwight responded to? Being screamed at and threatened. Of course.

Another great aspect of the Deangelo character was his need to brag. Juggling imaginary balls? Hilarious. And then it led to his demise. After he bragged about his Jordan-esque slam dunk skills, Jim challenged him to show off the real deal, not mime the act. So they went down to the warehouse, Deangelo dunked, hung on the rim for an obnoxious amount of time, and it fell over. Who can say spinal cord injury?! Deangelo can’t, that’s for sure. He showed up at the office in the post-credits bit, having escaped from the hospital, and couldn’t even string together enough words to tell a joke. And I guess that’s the end of Deangelo.

Personally, I’m good with how everything went down. We got a lot of laughs out of Deangelo, it’s fun seeing our regular office workers try and adapt to a crazy new boss, and it was a good gag. I can’t wait to see what else they’ll throw at us in the last few episodes of the season.

What did you think of “Inner Circle”? Did you want to see more of Will Ferrell? Less? Now, check out my favorite moments and quotes: