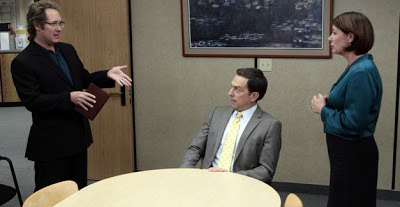 The Office has had an up and down season, but I think last night’s episode was an example of how to get things right. I like Robert California as an intimidating presence, and with the mixed messages he sent to Andy in “Mrs. California” last night, he was just that.

Robert burst into the office and told Andy, who was standing in his office with Jim, that in four seconds his wife would walk in wanting a job, and under no circumstances was Andy to give her one. And poor Andy, he tried his best, saying that the branch was all staffed up. But Robert persisted, making it basically impossible for Andy to say no – so he hired her. In the past I haven’t been a huge Maura Tierney fan, but I loved her in this episode and actually wouldn’t mind seeing her actually work in the office. (It would also give Robert a legitimate reason to be around more.)

Everyone in the office had previously been delightful to Robert’s wife Susan, but once Andy clued them in one what had happened they were instructed to make her life miserable so she’d want to quit. Susan caught on pretty quickly, and poor, honest Andy had a hard time hiding the fact that it was all because of her husband. In perhaps the funniest part of the whole episode, Jim tried to escape being roped into the uncomfortable situation by climbing to the roof. (Where he found Creed, flying a toy helicopter – brilliant.)

Jim was apprehended by Robert, but still tried to avoid getting involved by answering questions with a touching speech about how much he loves working with Pam, who’s on mat leave right now. (Did they have the baby??) The Californias seemed to come to an understanding after that, but I think the door has been left open for Susan to return. Also, the door seems open to Susan California to possibly have a thing for Andy. I really hope that happens.

Meanwhile, Dwight went about creating an on-site gym for the employees to join. His first attempt was described by Darryl as looking like the set of Saw 5, but once he’d created the real thing it was pretty hilarious to see Dwight act as a really intense personal trainer to Darryl.

All in all, I thought “Mrs. California” was a solid, funny episode. What did y’all think? Here are some favorite quotes and moments: