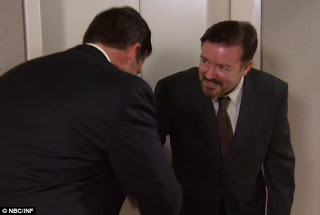 That’s the best word to describe the cold open in last night’s episode of The Office that saw Steve Carell’s character Michael Scott finally meet Ricky Gervais’s character of David Brent: Fine. The thing is, had Gervais’s guest spot not been leaked I would have been surprised and delighted by the cameo. It was funny, but after all the build-up I was left feeling disappointed.

But on to more important things: The episode itself, which I’d describe as average. I’ve been a big fan of The Office this year, but last night’s episode fell a little flat for me. It was funny, of course. It just wasn’t hilarious. 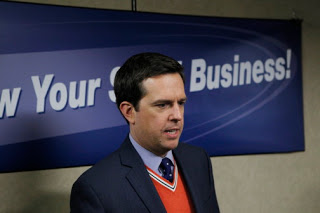 The way everyone played off Andy trying to score clients by running a small business seminar really worked. Jim told him it was a good idea and then immediately freaked out – we didn’t know why, just that it had to do with a dude who’d just walked in. Then Phyllis, Stanley and Dwight all bailed on poor Andy. They just thought the seminar attendees all looked like losers.

So Andy was stuck with the office riffraff to help run his seminar – Kevin, Kelly and Creed. Kevin was at once funny and disgusting. He ran around the room to music, high-fived people, and then threw up in front of everyone. Kelly was better – she introduced herself as “The business bitch” (one of several “bitch” titles she has squirreled away for when opportunity knocks) and phoned up some actual business professor she knows so he could reveal the eight secrets of a successful business over speakerphone. And then Creed just acted creepy. 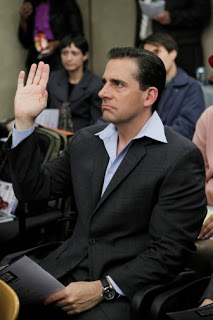 Once Dwight realized that some of the people at the seminar were the real deal, he, Phyllis and Stanley tried to get back on board. That resulted in what was probably my favorite moment of the entire episode – Darryl giving Andy advice from behind his newspaper. Along with some help from Michael and Holly posing as a Greek couple in the seminar, Andy actually managed to close a few sales.

The subplots were small, but mighty. The exchange between Jim and the guy he’d been hiding from (a childhood friend he’d dumped for being in the stupid reading group) was fantastic, and I loved seeing Pam and Oscar help Erin in her Scrabble game against Gabe. She lost because she has trouble thinking of words that include more than three letters, but I’m just thrilled that it looks like she’ll be dumping Gabe for Andy soon.

I can’t quite put my finger on what didn’t work about this episode, but as I said it just felt average to me. Still, there were enough funny lines and moments to make a list, so check it:

The Office: Oh Ricky, you're so fine
https://haligonia.ca/the-office-oh-ricky-youre-so-fine-32275/