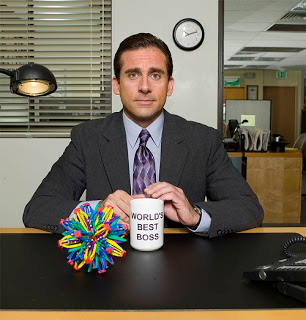 OK, who cried during Steve Carell’s final episode of The Office last night? OK, I didn’t. But I did get a little choked up there near the end, when Jim and Michael said goodbye, and when Pam chased him down in the airport.

Michael Scott’s departure from Dunder Mifflin was a great example of just how different this character is from his British counterpart. David Brent was an obnoxious oaf, and everyone working around him seemed generally miserable. And that worked for the short amount of time that Ricky Gervais chose to do the original The Office.

But Michael Scott and the American version is different. Over the past seven years we’ve come to love Michael Scott, even though he makes us cringe and sigh and wince and roll our eyes in so many ways. And same goes for the people who worked with him. He was a terrible boss. He’s done some stupid things, insensitive things, ridiculous things. But he’s always meant well, and he grows on you. He’s a buffoon, not a jerk.

Michael’s exit, to me, was perfect in every way. Back when Steve Carell announced that he was leaving The Office, I read an interview where he said he wanted Michael’s departure to be quiet and simple. I see they granted his wish. In some ways, Michael’s goodbyes contradicted everything we know about him. He’s always made a spectacle of himself, but instead he chose to tell everyone he was leaving a day later than he actually was. He said his goodbyes in small moments before anyone knew he was leaving, and he simply slipped out. He didn’t take the toys from his desk, he didn’t attend his party, he didn’t do anything big. And it was perfect, because it showed just how much he’s grown since he met Holly. He was excited to start his life with her.

Even though Michael lied about when he was leaving, the goodbyes he shared with each individual were still really sweet. The gifts he bestowed upon them were hilarious – it was like he was the Wizard of Oz, doling out trinkets and advice. The most surprising gift was that he gave Andy – Andy! – his ten most important clients. That was questionable. 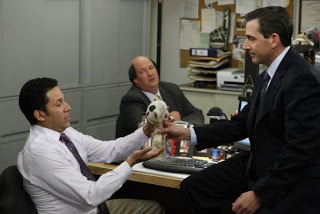 He wrote Dwight a glowing letter of recommendation. He gave Kelly the gift of leaving her alone. He told Toby he’d look up his brother in Boulder, Colorado! The funniest one was the little scarecrow he made for Oscar, because then Michael privately cracked up at how Oscar had accepted it as though it were a treasure, when really it looked, as Michael cackled, “like it was made by a 2-year-old monkey on a farm!” He overflowed with laughter as he said “He’s always had the lowest opinion of me of everyone!” We’ve never seen Michael this self-aware, yet I completely bought it.

Two of the goodbyes have to tie for the most touching. First, Michael’s goodbye with Erin. When Erin first joined the cast, I couldn’t have cared less about her. But she quickly became one of the best characters on the show. Not only is her love triangle with Andy and Gabe fantastic, but her relationship with Michael has been so well done. They’re both delightfully dim, but in different ways. Erin is a little sweeter than Michael, but Michael has had a chance to grow up a little more. The way he delivered some fatherly advice to her, and told her she didn’t need to find her birth mother because she could always call him, was so sweet it practically gave me a toothache.

Jim was the only one who caught on to Michael’s trick, which was completely appropriate. I loved how instead of really saying goodbye, Jim participated in the charade by telling Michael all the things he’d say when he took him for a goodbye lunch on his “last day”. Both guys had tears in their eyes, and it was perfect.

Michael did have one little panic attack about moving, which is only natural. He didn’t know the name of the town where he’d be living. He was going to be leaving the people he’s worked with for years, who are his best friends. He started to panic, saying “I can’t do this. All the channels are going to be different there. I’m not gonna be able to find my shows. And I am not going to start improv at level one, I don’t think my credits are going to transfer. I just figured out where to vote.” Michael had the same concerns anyone would about starting fresh in a strange place. Everything was going to be different. He wasn’t sure he could do it.

And then he called Holly, and he didn’t even have to say he was nervous. As soon as she started talking in her funny voice, all Michael’s fears went away. It was perfect. For so many years, Michael has considered his coworkers to be his family, and that’s part of what made him so unbearable at times. He was a guy who wanted desperately to be liked. But he has an actual family now, Holly.

Another fantastic part of the show was the way Michael and Pam said goodbye. She left to “go price shredders” because it was supposed to be a typical work day. The party had been planned for the next day. So as Michael crossed everyone off his list, Pam wasn’t there to get her goodbye. She was at The King’s Speech. They just missed each other in the parking lot. And then, right after Michael took off his mic and gave it back to the camera crew, Pam found him in the airport. I liked that we couldn’t hear their goodbye, because we really didn’t need to. Pam has always understood Michael better than anyone. She knows how to talk him out of a depression. She followed him to the Michael Scott Paper Company. She gets him, and we knew that their goodbye would be sweet and sad and genuine no matter what was said. Pam was the perfect person to watch Michael’s plane take off. Scranton won’t be the same without him.

I’m glad Deangelo had a task to do outside of the office, because it let Michael have the spotlight on his final day and provided a pretty humorous subplot. Turns out Deangelo is a terrible salesman, which is an interesting contrast to Michael – despite Michael’s multitude of shortcomings as a manager and a man, we always knew he was great at sales. That’s how he got to where he was in the company. Deangelo got his start with Sabre by saving Jo’s dogs from being stolen.

If someone can look like a bad salesman next to Andy Bernard, a self-proclaimed terrible salesman, then they must be bad. And Deangelo was awful – but Andy saved the day and kept the client, proving that maybe Michael’s gift did inject him with some confidence.

The next day Michael didn’t show up for his party, and Deangelo had an incident with the cake. He used to be obese, and clearly does not have the best relationship with food. Dwight pretty much said it all when he looked at Jim and said “Uh-oh.” I like that Deangelo is differing from both Michael and another interim manager, Stringer Bell (what was that guy’s name again?) in a lot of ways. He sucks at sales, he’s a loose cannon. Whereas Stringer Bell was different than Michael in that he was all-business and had high expectations (what a drag), Deangelo represents a worse boss than Michael. As evidenced by the touching goodbyes, Michael ended up being a likable boss. Deangelo won’t.

The extra-long episode was filled with so many great moments, I won’t be able to touch on them all. But there were a few that stood out.

I liked how this episode acknowledged the documentary that’s been in the making for seven years. At the beginning of the episode Jim asked “So you film people going to the bathroom now?” after the crew followed Gabe and Andy into the men’s room. It was a nice little shout-out to the mockumentary style, and in a way the fact that it’s been going on so long. They’ve been filming these people for seven years and are now comfortable enough to even follow them into the bathroom.

Then when Michael said goodbye to the cameras, he said “Hey, can you let me know if this thing ever airs?” and then took off his mic. I’m not sure why, but I really loved that closing remark.

I liked that even though the episode highlighted Michael’s likability, there were still some classic Michael Scott moments. The return of one of his racist caricatures, Ping. The way he repeated “Catch you guys on the flippity-flip” over and over again to the warehouse guys until he final managed to sink a backwards shot with the basketball as he said it.

For me, nothing represents this episode better than one of the moments at the beginning of the episode, when Michael threw away the “World’s Greatest Boss” mug he’d bought for himself because he had the “World’s Greatest Boss” trophy that he’d actually been given. It epitomized the journey we’ve been on with Michael. Plus, it was pretty awesome when I spotted Creed with the mug later.

What did you think of the grand finale? Do you think Steve Carell will finally get an Emmy? I think he has long deserved one, and his performance in this last episode couldn’t have been better.