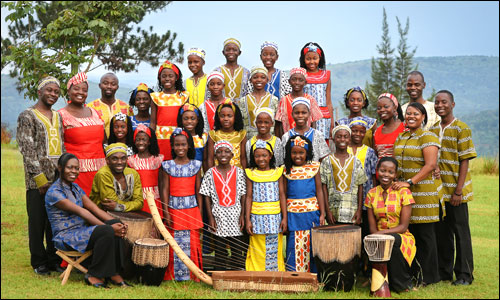 Watoto means “The Children” in Swahili and these children are on a mission that will take them on a journey from the West to the East Coast of Canada in 2011. Through inspirational songs and compelling stories, the Watoto Children’s Choir is spreading a message of hope for Africa’s children.

Join the Watoto Children’s Choir for a Concert of Hope on May 15th, 2011. Concerts of Hope are free, family-friendly events featuring African rhythms and harmonies, which are accented by brilliant costumes and inspirational stories from the children of Watoto Children’s Villages in Uganda, East Africa. You will be moved by the music and captivated by the energy of these talented Ugandan children.

About Watoto: Watoto was established in 1994 as a compassionate response to the critical AIDS crisis in Uganda, East Africa. Today, Watoto is impacting the lives of more than 2,000 children who have been orphaned and abandoned as a result of the AIDS epidemic, civil strife, extreme poverty, or other catastrophic events, by providing for their physical, emotional, educational and spiritual needs.

The purpose of Watoto is to give these children hope, dignity and meaning. For this to become an ongoing reality, Watoto’s goal for 2011 is to mobilize 11,000 global sponsors to further increase the number of children rescued from desperate circumstances. With this in mind, Watoto encourages the support of all Canadians to sponsor a life and to change a story for these vulnerable children.

Living Hope is a new Watoto program that has transformed the lives of an estimated 1,200 women in Kampala and 900 women in war torn Gulu, Northern Uganda. The target groups are HIV positive single women, returnees from abduction by the Lord’s Resistance Army, and teenage mothers. The goal of Living Hope is to restore dignity to vulnerable women. The 2011 Canadian Tour features fair trade items for purchase that are made by women in the Living Hope program.

Watoto’s purpose is to RESCUE A CHILD, RAISE A LEADER, REBUILD A NATION.

For more information about ‘Sponsoring a Life’ please call our toll free number at 1-888-9-WATOTO Ext: 110 or visit our website at www.watoto.com.

Concert of Hope
When: Sunday, May 15, 2011 at 10:30 a.m.
Where: Full Gospel Church (806 Kearney Lake Road)
Cost: Concerts are FREE and open to the public. A free will offering will be taken during the performance and opportunity given to sponsor a Watoto child.

– Watoto means “The Children” in Swahili.

– Approximately 2.5 million children in Uganda have been orphaned; an estimated 1.2 million due to AIDS alone. (2007, UNICEF)

– There are currently 2 well established Watoto Children’s Villages in Kampala, Uganda, and a 3rd established in Gulu, in war torn Northern Uganda.

– In 2011, Watoto will expand its compassionate ministry into Cape Town, South Africa to rescue, raise and rebuild vulnerable children and women there. This will be initiated through a partnership between Watoto and Life Church in Cape Town, when Life Church becomes Watoto Church on February 13th 2011.

– Watoto uses a holistic childcare approach that addresses the academic, social, emotional, physical, and spiritual needs of the children.

– Watoto villages are built to become self-sustaining. Each village consists of homes for the children, a school, a medical clinic, a community centre, and an agricultural project.

– The first ‘Baby Watoto’, in Kampala opened its doors in January 2007. Baby Watoto provides quality care and attention for orphaned and abandoned babies under the age of 2. Watoto currently has 3 babies’ homes, one in downtown Kampala, another in Suubi Village and a third in Gulu, Northern Uganda.

– Living Hope is a new Watoto program that has transformed the lives of an estimated 1200 women in Kampala and 900 women in war torn Gulu, Northern Uganda. The target groups are HIV positive single women, returnees from abduction by the Lord’s Resistance Army, and teenage mothers. The goal of Living Hope is to restore dignity to vulnerable women.

– Since 1994, 44 choirs have toured internationally, presenting Watoto’s vision and mission through music and dance. This has given over 830 children the chance to tour with the Watoto Children’s Choir!

– In 2007, the Watoto Children’s Choir had the privilege of performing for the Queen of England at Buckingham Palace and at CHOGM in Uganda.

– In 2008, the Watoto Children’s Choir had the privilege of performing at CIDA headquarters in Gatineau, Quebec as well as in the House of Commons and for Prime Minister Stephen Harper in Ottawa.

– Funding for Watoto is made possible through free will offerings at the end of each performance as well as donations from individuals, businesses, churches, groups and communities.

– Choir tours are funded by the sale of Watoto merchandise, including CDs, DVDs, T-shirts African jewelry and African craft items made by women in the Living Hope program.

– Watoto’s greatest need is support through sponsorship. Individuals can sponsor a child, baby, or a house mother for $35 CAD per month.

Children from Africa bring a message of hope to Bedford
https://haligonia.ca/children-from-africa-bring-a-message-of-hope-to-bedford-37071/