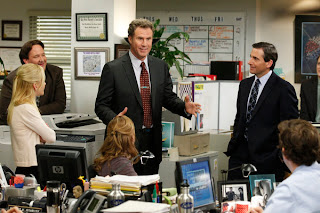 OK, let’s cut to the chase. What did you think of Will Ferrell’s appearance on The Office? I, for one, was impressed. After all, his multi-episode run on the show has been hyped quite a bit, and that sort of thing often leads to disappointment. It also signals the end of Steve Carell’s time on the show, so I was worried Will Ferrell would just overshadow that. Instead, I thought it played out perfectly.

Will Ferrell’s character Deangelo Vickers is quirky enough to fit in with the cast and make a hilarious new boss, but not so big that he either overshadowed or mimicked Michael Scott. He’s a lot like Michael in some ways – after all, they chatted for half an hour at a bar before realizing they were supposed to be meeting each other. But he’s different, too. He’s a little more businesslike, he doesn’t like Jim and Pam’s baby, and he loves the American Southwest.

I loved watching Michael go from loving his replacement to being completely bitter and jealous as he watched everyone in the office bend over backwards to impress him. As happy as Michael is to be moving away with Holly, there was bound to be a huge part of him that didn’t want to leave his Dunder Mifflin family and this was a hilarious way to portray it. Michael is at his best when he’s riding the line between lovable and obnoxious, and that’s what he did in “Training Day”.

I love watching everyone in the office try to impress someone new, like they did when Stringer Bell was in charge for a while. Remember Jim pretending to like soccer? This was just as good. Kelly staged a meet-cute. Jim and Pam told way too many adorable anecdotes about their baby after hearing that Deangelo has four kids of his own. Andy went to great lengths to make Deangelo laugh after he was christened the office “funny guy” for accidentally saying something funny. Darryl went so far as to dress like a cowboy! 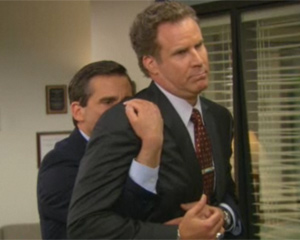 All in all, I thought it was a very well-done episode that managed to do justice to the legacy leaving and the new opportunities for comedy that are presenting themselves. It left me feeling sad that Michael Scott is leaving, but also looking forward to seeing what else will happen as the new boss settles in. There were a lot of laugh-out-loud moments during the episode, so here are some highlights:

What did you think of “Training Day”, is Will Ferrell a good fit? Are you looking forward to Carell’s two-part swan song?