It’s official, Parks and Recreation is the funniest comedy on TV. Hands down, no contest. I’m not sure that I ever stopped laughing during last night’s episode. Honestly, rather than listing a few of my favorite quotes from “Fancy Party”, I should just post the whole damn script because it was that funny.

April and Andy decided to host a dinner party because it’s a mash-up of their two favorite things – dinner and parties. But guess what? It wasn’t just a party! It was a wedding! Their wedding. Yes. And as ridiculous as that sounds, it completely and totally worked. Leslie as the voice of reason/gloom and doom did a perfect job of saying everything that a normal person would say, yet there was no part of me that thought “Why the hell would April and Andy get married?” It was perfect.

There were so many hilarious touches. April and Andy handing out invitations asking guests to bring everything from flatware to cooked steak to a 3D television and Avatar was so, so funny. Way to take the idea of a potluck to the next level, guys. I loved their weird, creepy, vampire-ish friend Oren, I loved the fact that Andy wore a jersey for the ceremony, and I loved Tom’s desperate need to be the best best man.

While everyone else was at the wedding, Donna and Ann were at a singles night. I am so glad the show has found such a good use for Donna, because she is really funny. At first she wanted nothing to do with Ann because, you know, it’s a jungle out there. But eventually she took Ann under her wing because Ann is pretty much a lost cause when it comes to flirting. I love how Ann, who once helped Leslie practice for a first date, is so helpless now that she’s single. Donna’s advice couldn’t have come at a better time either, since Andy is now married. It’s really a testament to how well Parks and Recreation has gelled their cast that, until I saw Ann’s reaction to the news that Andy was marrying April, I’d forgotten that they’d been in a serious relationship when we met them. 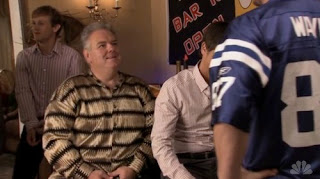 Now, let’s run down the best lines and moments from the night because there were so, so many of them.

What did you think of “Fancy Party”? Are you excited to see how April and Andy interact as a married couple? One thing I really loved was how April and Andy’s impulsive wedding contrasted Leslie’s recommendation to Ben that he made a pros and cons list in order to decide if he should stay in Pawnee. We knew Ben would stay in Pawnee because Adam Scott is a series regular, but it was still a very sweet moment when Leslie told him to stay, and he said he’d already accepted the job. Now how long before we see them get together?

I do have one complaint, though. NBC has set up a website for April and Andy’s wedding called www.awesomesaucewedding.com. Thanks a lot, NBC! Now if I ever get married, the domain name I wanted for my website will be gone. Real nice.