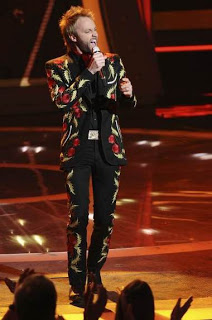 OK, I get it. Paul was never going to win. I knew that all along even though I was rooting for him. But gone this week? Noooooo. So unfair. He deserved to stay longer and Stefano and he definitely deserved to stay longer than Jacob, or maybe even Haley. I think he’s better and more interesting than Scotty too, although I acknowledge that that is based entirely on personal preference.

Argh, I’m just so disappointed. Paul has such a cool voice and such fantastic stage presence. If he’s lucky enough to some how score a record deal out of this (and actually make a record after scoring said deal…because you all know signing with a label doesn’t mean everything) I would totally purchase his stuff.

Disappointing results aside, the show was OK. Scotty and Lauren did another duet, and it was fine. I mean, she was great and he was Scotty. I loved Casey and Haley’s duet together. Haley has such a beautiful voice when she sings jazz, and they had great chemistry together. The boys’ performance of two Simon and Garfunkel songs was great, though the whole time I was saying “Come on Jacob, keep it reined in.” In particular, Paul and James sounded great. Paul has the perfect voice for the songs they chose, and even though I didn’t love James’ heavy metal performance I do appreciate his incredible range.

In other news, Rob Reiner’s appearance was funny and I liked both Kelly Clarkson’s duet with Jason Aldean and Rihanna’s performance. Kelly Clarkson has a phenomenal voice and sounds good no matter what, but I hope she doesn’t stay in country music forever. I’ve seen Rihanna sing better (no seriously, I saw her at an outdoor concert once and she was amazing, and most definitely not lip-syncing) but I pretty much like her no matter what.

What did you think of the show? Are you disappointed that we won’t be getting more of Paul’s quirky voice, bizarre dance moves and gleaming smile? And further proving that she could be my best friend, Jennifer Lopez requested his swan song be “Maggie May”. Thanks, Jennifer!