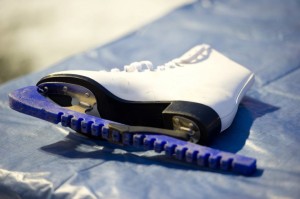 [The 2011 Canada Games are coming to Halifax between February 11-27. This week we’ll be dedicating East Coast By Choice to the event. Today, our guest is my sister-in-law who has a special message from a unique perspective. She’s a former speed skater and current volunteer at the Games. If you’re inspired by this post, check out the Save the Oval petition.]

By Sheree Walsh
I will never forget the first time I laced on a pair of speed skates; it was odd but the feeling of whizzing around the rink with something other than figure skates was exciting and new. Sports for young girls in NL in the late 70’s & early 80’s were pretty limited so when the opportunity came to be part of something unique I was eager to try it out. It was different that’s for sure, but I took a liking to it right away and was first in line when they presented me with an opportunity to be a part of the NL Long Track Speed skating team that would enter the 1979 Canada Winter Games in Brandon Manitoba. A pretty bold undertaking considering we didn’t have access to an outdoor oval, just one stadium which served several communities so getting ice time was a challenge but we took what we could get. The ice surface was only available from October to around April, and then we would start dry land training until the ice surface was available again in the Fall. To get the experience of an oval, we had to travel off the island several times which was costly but there was no choice. The Canada Games I attended was an experience that I won’t forget but when I returned from the Games there was no oval for me to continue with the sport if I wanted. I could have continued with the short track but long track is what I wanted. Sadly, I lost interest and haven’t been on speed skates since.

This year I am a volunteer at the 2011 Canada Games and will be a minor official for Long Track Speed Skating. There was a test event at the Oval on Jan 15-16 which I participated in as a volunteer and I have to say, when I arrived at the Oval and saw the speed skaters, I was wishing I was out there as a participant. It was great to watch and be a part of and I can only imagine how exciting it will be during the Games.  There are a lot of talented speed skaters in this province who could benefit greatly if they had access to an Oval once the Games are over. What an opportunity to develop some great talent! I can’t help but think that if I had access to an Oval when I returned from the Games back in 1979, I would probably still be participating at some level.

There is also the potential of hosting speed skating events if the Oval were to remain. I would love nothing better than to go to a speed skating competition and watch top notch athletes compete. Most of us have watched it on TV, but nothing compares to watching it in person. It’s exciting and you get a real sense of the commitment it must take to be in this sport.

A large number of successful speed skaters come from Quebec and it’s not only because they have the support from businesses and the Province but they have access to an Oval, which makes a huge impact on how a skater develops or continues with the sport.

The Oval would not only benefit speed skaters, it would benefit everyone as evident from the droves of people, young and old, who are turning out to use it. We hear on the news about the lack of exercise our kids are getting and now schools are bringing the kids to the Oval to skate, surely that can only be positive. My workplace is encouraging staff to go for a skate over their lunch hours and on weekends.

I feel sorry for the people who think that this Oval is not a good thing, the positives so outweigh the negatives; it’s a no-brainer. There was a time I wouldn’t walk past the Commons because I felt unsafe, especially after dark, now it’s become an awesome outdoor venue where the whole family can go to have fun and get some exercise while you’re at it.  It’s like the people of Halifax have reclaimed the Commons, and that my friends is a wonderful thing.

Kimberly Walsh is a social media and online community manager. You can follow her on Twitter @AliasGrace.