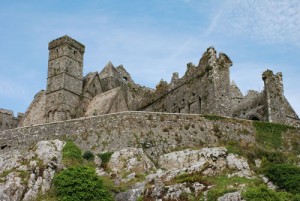 So, yes, we survived Limerick and lived to tell the tale.

On our way out of stab city and en route to Dublin, we stopped at the Rock of Cashel. The buildings on this site date back to around the 12th and 13th centuries. Included in the price of admission is a guided tour which we were fortunate enough to catch upon arrival.

The guide was animated and provided a great deal of interesting history on the Romanesque and Gothic buildings. Among the stories, included the suggestion that the first batch of Guinness was actually brewed in Cashel somewhat by accident and long before Arthur Guinness ever dreamed of being a stout magnate.

Any history buff would enjoy the stop in Cashel for its significance in Irish history. The surviving buildings are quite amazing as well. The guided tour gives a great glimpse into the lives of people who lived in the buildings and of the necessity of architectural discomfort in design in order to protect against invaders. Google “murder holes” just for an example (or use your imagination as it’s not a far stretch). Thankfully, today visitors just need to remember to bring a light sweater or jacket. 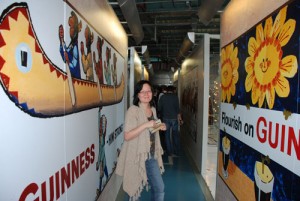 At the Guinness Storehouse

Our next stop was Dublin where we’d spend the rest of our vacation. It’s a surprisingly diverse city. One day was spent on a hop-on hop-off tour where we visited the Guinness Storehouse and read about a different version of the Cashel story on our self-guided tour. Besides the free pint included in the price of admission, one of the greatest parts of the tour was the panoramic view from the bar.

The bus was a relaxing way to see Dublin but I’m not sure if I’d do it for a bigger city unless it was just to sit back and enjoy the commentary. The ability to hop-on and hop-off enough times to see what you want might be lost otherwise.

Dublin is a bustling city that offers a healthy nightlife and ample opportunities to spend your money. Shopping and eating around Grafton Street and  Temple Bar were thrown into the mix of things to do and rounded out trip nicely. When we returned from vacation one of the first things we did was watch the movie Once for the first time, which I came away from thinking of as a love song for Dublin.

Up next: The mysteries of Newgrange.

The Rock of Cashel, Dublin and a tale of two Guinness
https://haligonia.ca/the-rock-of-cashel-dublin-and-a-tale-of-two-guinness-4679/