No, it’s not the fact that the other Megalithic passage tomb monuments on this site, Knowth and Dowth, rhyme with south. I took the liberty of rearranging the chronology of vacation events in order to save the best for last. Hey, it’s my blog and I can play around with the space-time continuum if I want to.

In any case, before dropping off the rental car while in Dublin, part of the family decided to visit Newgrange and Knowth, the site of Stone Age passage tombs that are over 5,000 years old. That makes these tombs older than both Stonehenge and the Great Pyramid of Giza! (The exclamation point serves as an indication that this was one of the highlights of the trip.)

Visitors can only access the sites by guided tour meaning we had to stop at a visitor center before taking take a shuttle bus to each of the sites. You can choose to do one or the other but we opted for both. With a lunch break in between we were there for just over three hours. 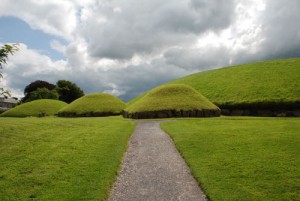 The Great Mound at Knowth is similar in size to Newgrange and is surrounded by 18 smaller satellite mounds.

The timing worked out that we saw Knowth first. At first site, they just look like grassy knolls. To think that these were constructed at a time before heavy machinery is amazing though. Particularly because the larger mound has a passageway leading into a tomb.

There are 124 surviving Kerbstones at the base of the main mound at Knowth, each decorated with ancient artwork. Incredible to think that something so old could survive for so long.

The most memorable part of this excursion was in Newgrange but it’s certainly not for the claustrophobic. Getting to the chamber requires ducking down and at one point turning sideways and shimmying in. Once there you’re in a crowd of about 15 people and it’s a comfy squeeze but you’ll be amazed by the work that went into building the waterproof site. 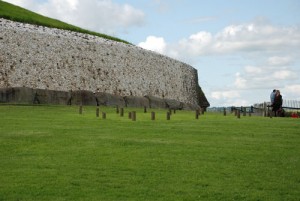 Newgrange has been designated a World Heritage Site by UNESCO and attracts 200,000 visitors per year.

Both tour guides at each site were fantastic and provided lots of interesting details about the tombs. But at Newgrange we were treated to a recreation of the solstice. Again, definitely not for those afraid of crammed spaces because here the lights were turned off and for a moment we were left in utter darkness. Then a stream of light came through and slowly but brilliantly lit up the chamber.

One can only imagine what it would be like during a real winter solstice with the sunlight beaming into the chamber. There’s actually a lottery to do exactly that!

And so that pretty much wraps up the London & Emerald Isle 2009 vacation posts. For more images, check out my Flickr account.

Next week, I’ll talk about some of the memorable food and drink consumed during the trip. Then it’s back to regularly scheduled blog posts.

The mysteries of Newgrange
https://haligonia.ca/the-mysteries-of-newgrange-4773/