Food in London and Ireland was about what we expected it to be: ample servings of meat and potatoes. While we made it into our fair share of pubs, we did try to balance our diet out with other dining establishments and markets. It’s not that the meals were totally devoid of vegetables—we’d often get a bit of lettuce in sandwiches or boiled peas and carrots on the side of a meal—but we were all craving fresh vegetables by the end.

Sometimes when I got a tiny side salad with a meal, I felt like holding up my plate and saying: “Please, sir, may I have some more?” 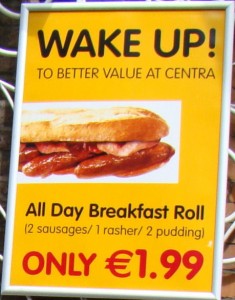 For people who prefer to clog their arteries on the go.

Full English or Irish breakfasts were the norm for the meal that came with our hotel stays. These are the types of breakfasts that I usually reserve for weekends but they were so common that when in Ireland we actually saw a sign at a petrol station that served it on a bun! That being said, the food was tasty and great for sustaining long days filled with walking. Here are some of the highlights during our two-week vacation:

Sawyer’s Arm (London)—This spot was located within a stone’s throw from our hotel and served as our watering hole. Pints and meals were all very reasonably priced for a city that is otherwise quite expensive as a Canadian tourist. We stopped in for dinner one night where I had the steak & ale pie which was served with the sweetest peas to ever hit my palate and a personal sized pot of gravy. Cokebaby went with a Yorkshire pudding wrapped roast beef with chips (aka French fries).

Villa Rosa Restaurant (London)—This family owned restaurant was a great find. Cokebaby and I shared bresaola as an appetizer and with the meal we had a bottle of wine. He had veal with mushrooms, I had a creamy gnocchi, and we ended the meal with a shot of sambuca and tiramisu all for under £40. It was simple, almost home-style Italian fare with friendly and efficient service.

Café Lafayette (en route to Ireland)—I only mention the overpriced meal on board the ferry Ulysses for the fact that it introduced me to a thing called a bap. In and of itself, a bap is simply a sandwich made with a specific type of bread roll (much like a non-crusty version of a Kaiser roll). But the chicken bap that Cokebaby and I shared had an amazing ingredient: caramelized red onion relish. We brought back a bottle from Tesco but once that runs out, I can only hope that Pete’s Frootique carries something similar. 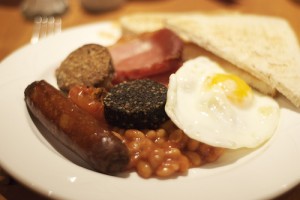 EdMar B&B (Williamstown, Ireland)—A wonderful spot to stay for a relaxing vacation in the countryside, owners Liam and Rosie also provide the best full Irish breakfasts in the cost of the accommodation (with delicious soda bread). For an extra €10 per person they made us a fantastic family dinner of cottage pie with sides of peas, carrots, and homemade bread.

The Locke Bar & The Oyster House (Limerick)—Yes, I know, I gave “stab city” a bit of a hard time in my vacation blog posts. Keep in mind though that on our way to this dining establishment, a lead pipe fell out of the pants of a sketchy looking character walking our way. We did have a nice feed of seafood here though. The in-laws had mussels while Cokebaby and I shared a plate of oysters (his first time ever and I wish he’d let me post a picture we captured of his expression) along with a side of Colcannon. The latter (a traditional Irish dish made from mashed potatoes, kale or cabbage, butter, salt, and pepper) was strictly for the purpose of trying them because I hadn’t seen them on a menu anywhere else.

Gus O’Connor’s (Doolin)—Although a very small town, Doolin seems to be quite a popular destination for tour buses. So we were surprised to find the food a bit overpriced for what we thought would be a quaint spot for an inexpensive meal. Service was mediocre but the food was tasty. I had a lovely seafood chowder (served with soda bread!), Cokebaby and his brother each had fish and chips, and Cokebaby’s sister-in-law had a chicken sandwich that came with a side of Ballymaloe country relish. Again, we brought back a bottle of the stuff and I’m starting to think I should contact Pete’s Frootique for a wish list now.

Kyteler’s Inn Medieval Tavern (Kilkenny)—Established in 1324. Need I say more? Oh, alright. We stopped in here for a pint and a snack based on a write-up about it being one of the oldest pubs in Ireland. The appetizers weren’t spectacular but the atmosphere was what we expected. A nice spot to stop for a pint of Smithwick’s (brewed in the town). Oh, and there’s a witch on site.

Maloti (Dublin)—If you’re looking for a hit of modern Indian food, this restaurant offered great service and a set dinner menu for €16.95. It was kind of hit and miss around the table but I quite enjoyed my paneer, lamb korma, naan, and mango lassi. The servings were quite large which gave us the opportunity to sample each other’s meals. The biggest disappointment was Cokebaby’s chicken tikka masala.

Panama (Dublin)—Since getting off the plane in London we noticed signs at food shops for something called “jackets” which we later found out were basically stuffed baked potatoes. This pub is located on Bachelor’s Walk near O’Connell Street where we stopped off during our hop-on hop-off bus day. Cokebaby and I shared Panama jackets (chili and cheese) and a ham & cheese toastie (a regularly sandwich grilled like a pannini). The servings were large and each came with an amply sized side salad!!! Although the place serves standard pub fare the atmosphere was warm and modern. Food was reasonably priced and the service was stellar.

Pad Thai @ Shine (Dublin)—This restaurant is the one that stood out most for Cokebaby and I, and it was purely for the food. Service and atmosphere were completely overshadowed by what came out of the kitchen. To start off we got a basket of prawn crackers which is something I haven’t seen since I moved away from Toronto. I had Pad Thai: Thailand’s staple dish of broad rice noodles, chicken and prawn stir fried with egg, scallion, shredded carrot, peanuts and bean sprouts. Cokebaby ordered Pad Ki Mow: Spicy rice noodles with beef, chili, lime leaves and tomato. Cokebaby’s brother went with Drunkards Noodles: The cure, Bangkok style! Vermicelli noodles with chicken, lime leaves, bean sprouts, tomato, garlic, chili and bok choy. And Cokebaby’s sister-in-law had the Priw Wan – Sweet and sour chicken with onion, peppers, cucumber and tomato. Each dish was €12.00 and well worth it.

The Brazen Head (Dublin)—I have to mention this spot because it’s Ireland’s oldest pub, having been established in 1198. Although we stopped in to try the traditional Irish stew, we more enjoyed having pints in the courtyard (choose a sheltered area because of the constant chance of rain). Here we were able to listen to traditional Irish music which is missing from most pubs.

Oliver St. John Gogarty Traditional Irish Bar (Dublin)—Another spot worth mentioning for the atmosphere and music. Many pubs seem to play modern dance or retro 90s music. As a tourist this was more my cup of tea.

Gallagher’s Boxty House (Dublin)—My quest for a Gaelic boxty was fulfilled at this touristy establishment. With an order of a main course we each got a pint of Murphy’s stout free as well. It was the only place we saw boxty on the menu so I can’t compare it except with the ones I’ve had in Halifax. I wasn’t disappointed. This past weekend I attempted a recipe from the Food Network with great success for a post-vacation dinner with the in-laws.

Tesco, Fresh, Dunnes (Ireland)—Our modus operandi while on vacation is usually eating on the cheap by visiting markets and grocery stores. Clearly, from the above list, we didn’t really get around to doing much of that. However, we did make it to a few of these spots for breakfasts, snacks, and packed lunches. You can get everything from croissants and baguettes, to cheese and even beer and cider. Speaking of which…

Bulmers (Ireland)—Not a place but a beverage. It was my drink of choice at most pubs. Hats off to the brewers at Bulmers (aka Magners) for making one great cider and an even better perry! Now please come to Nova Scotia.

Thus ends the vacation posts. Check back at the end of the month for some guest posts that I’m calling East Coast By Taste. I’ve got some chefs and foodies lined up to talk about their passion and even got them to share some of their favourite recipes. Now back to regularly scheduled blogging.

English and Irish cuisine: my kingdom for a salad
https://haligonia.ca/english-and-irish-cuisine-my-kingdom-for-a-salad-4827/