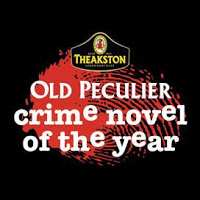 The Theakstons Old Peculier Crime Novel of the Year Award, now in its eighth year, was created to celebrate the very best in crime writing and is open to British and Irish authors whose novels were published in paperback.

This year’s winner is Denise Mina for The End of the Wasp Season (M). This is second of Mina’s novels to feature Alex Morrow. The first in the series is Still Midnight (M).

“Sarah Erroll has jetlag. Lying in bed in the mid afternoon, savouring a glorious sleep in her childhood nursery, she thinks she hears a noise downstairs. But it’s a big house, an old house and floor boards snap, walls creak and sag, timbers groan. She doesn’t like it. She leaves the radio on when she’s here alone to mask the sounds but the radio is off. Then she hears a woman’s voice on the stairs. There are two of them and they come into her room, menacing, angry, clearly not here by mistake. But she’s never seen either of them before and doesn’t know why they’re so angry.
Alex Morrow is called at her father’s funeral and ordered to the house but the officers below her are worried: strong men can’t look at what they did to Sarah Erroll. Scene of Crime officers can’t cope with what they did. Meeting an old friend from her school days Morrow gets drawn into a world of obvious answers, but Sarah Erroll was not who she seemed to be and Morrow has to fight for the chance to investigate the many other lives of a woman no one seemed to have known.”
Also nominated were:
Black Flowers (M)
by Steve Mosby
Before I Go To Sleep (M)
by S.J. Watson
The Burning Soul (M)
by John Connolly