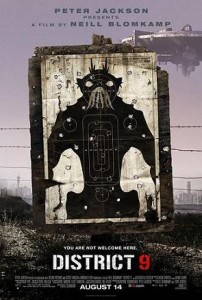 I know a lot of people really loved this movie. That said, if I was going to sum up District 9 in 140 characters or less, I’d write: possibly one of the most unsubtle movies I’ve seen in a long time in terms of theme. But I’m not writing this post to critique the movie.

If you liked District 9 for the themes the movie addressed of racism and xenophobia, I’m only going to recommend one book. My rationale: it’s a heavy topic and this book really encapsulates the unfairness war and refugee life.

Better yet, it’s a true story.

Considering I rarely read non-fiction, it takes a pretty spectacular work and writer for me to actually recommend one. So, here goes:

A Long Way Gone: memoirs of a boy soldier by Ishmael Beah—The title is pretty self-explanatory. It’s the story of a boy caught up in the civil war in Sierra Leone. One moment he’s playing with school friends and the next he’s being trained to kill. I recall an interview on The Daily Show that moved me to pick up the book, in which Beah said that his return to “civilized society” was more difficult than the process of becoming a child soldier. He believed that dehumanizing children is a relatively easy task and the reason why so many of them were recruited. It’s a heartbreaking story but also one filled with hope and determination.

Recently, Beah spoke at the Rebecca Cohn here in Halifax in support of the non-profit Child Soldier Initiative organization. Since escaping from the war, he’s worked as a member of the Human Rights Watch Children’s Rights Division Advisory Committee and has spoken before the United Nations, the Council on Foreign Relations, the Center for Emerging Threats and Opportunities (CETO) at the Marine Corps Warfighting Laboratory.

If you’re so moved, there are lots of foundations to get involved with to assist people affected by the war, disease, poverty, and lack of simple resources like water. On Twitter alone there’s the Stephen Lewis Foundation, charity: water, Twestival and so much more. Locally there are advocates against the travesty in Darfur like hail_mary.

I will now descend from my little soap box.

You can leave more Twitter non-profits and people that are making a difference in the comments section.

This is not a film review: District 9
https://haligonia.ca/this-is-not-a-film-review-district-9-5393/