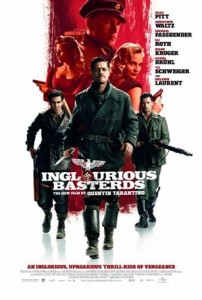 I’ll come right out and say it: I’m a fan of Tarantino. Even if you’re not, or simply didn’t enjoy the movie Inglourious Basterds (we can still be friends, right?), I thought I’d recommend a few good books about World War II. War movies and violence in films aren’t usually my thing—yes, I realize I’m kind of a paradox right now—but there are a few exceptions.

Honestly, I generally can’t even read about gore. A couple years ago, a friend recommend a book called the The Ruins because it was the scariest book she’d ever read. I actually had to do the equivalent of covering my eyes while watching a movie by skipping several pages. I can’t even imagine what the movie was like. In addition to which, I now have an unhealthy suspicion of flowering vines.

In any case, here are my recommendations of books that are more about intrigue than gore.

The Wind-Up Bird Chronicle by Haruki Murakami—As with most of his writing, this book crosses genres. It’s part detective, part historical fiction with a good mix of the surreal. Among the narrator’s bizarre encounters in an alternate reality of Tokyo is an ageing war veteran who is unalterably affected by the terrible acts he witnessed during Japan’s forgotten campaign in Manchuria.

Downhill Chance by Donna Morrissey—A distinctly Canadian take on the Second World War, Morrissey captures outport life in Newfoundland incredibly well and without all the expected clichés. Maybe it’s because Cokebaby is from “the Rock” but what I love about this book is reading about the way of life and the interesting turns of phrases. The story takes place against the backdrop of World War II in pre-Confederation Newfoundland when a man returns from the war broken and guarding a terrible secret that takes on a life of its own long after his death.

The English Patient by Michael Ondaatje—Much like Tarantino’s non-linear storyline, this book takes the same approach. It’s the story of four people and their lives during the Second World War: a critically burned English man, his Canadian nurse, an Italian thief and an Indian sapper in the British Army. There are so many beautiful sentences and paragraphs in this book that it must have been quite a task for the movie to do it justice. Despite having first read it well over 10 years, it’s my go-to book for inspiration when writing.

That’s all I’ve got for this movie. If you’re so inclined, friend me on Shelfari where you can check out what else I’ve been reading.

Do you have any recommendations for books about World War II?

This is not a film review: Inglourious Basterds
https://haligonia.ca/this-is-not-a-film-review-inglourious-basterds-5908/