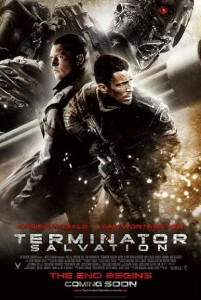 Just a couple of notes about the movie Terminator Salvation before I get to the books part of this post. First, what was up with that ending? Second, and I know this is picky for an action flick, but was it just me or were there glitches in Cyberdyne Systems’ programming of Marcus Wright’s accent?

Anyway…this film brought to mind, perhaps rather obviously, books about salvation. Here are some great reads that I think would go along really well with the theme:

Alias Grace by Margaret Atwood—That’s right. If you follow me on Twitter you’ll know this is my handle, chosen among other reasons because it’s one of my favourite books. It’s a fictional account of the real life of Grace Marks, one of the most notorious female murderers in Canadian history. Whether she was truly instrumental in the deaths of her employer and his housekeeper or simply an unwitting accessory is unknown. The story is told between the perspectives of Grace Marks and a fictional doctor who studies her case in hopes of determining her guilt or innocence. You can hear an excerpt by yours truly on Seen Reading.

Do Androids Dream of Electric Sheep? by Philip K. Dick—The plot of this book laid the groundwork for one of my all-time favourite movies: Blade Runner. In it, Rick Deckard (a bounty hunter) is tasked with “retiring” six escaped Nexus-6 model androids. In this dystopian world, androids are used for menial labour or jobs considered too dangerous for humans. Like Terminator Salvation, this novel also explores the theme of what it is to be human. As a side note, will be released as a series of comic books this year. AND there’s talk of webisodes based on the world created by Philip K. Dick.

The Wars by Timothy Findley—If you didn’t read it in high school, do yourself a favour and pick up a copy. It’s a Canadian classic about 19-year-old Robert Ross who enlists as a soldier in the First World War after a personal tragedy. The story is told essentially by one historian’s reconstructions based on archival materials, including interviews with the few living people who knew the young man. It’s not just a tale about the Great War but the internal wars that we all wage as human beings.

Your turn: what books would you recommend based on this theme (or to go along with the movie)?

This is not a film review: Terminator Salvation
https://haligonia.ca/this-is-not-a-film-review-terminator-salvation-2869/