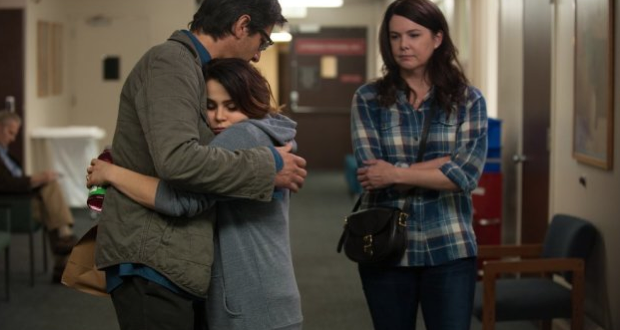 Thoughts on the “Parenthood” Finale and Season Overall

This week, Parenthood ended its fifth season. It’s a show that I’ve always loved, even when some of the story lines are weaker than others. This season was a little topsy-turvy in that sense, but the show still remains one of my favorites. 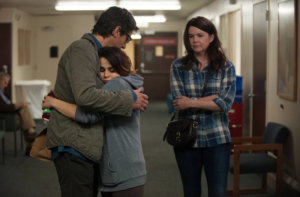 Hank, Amber and Sarah on Parenthood

Even when I don’t like a major story arc on Parenthood, I still like the characters. I like the people, and the family enough that I can somewhat overlook the thing that’s bothering me.

This season, Adam and Kristina’s plot was the most clunky. The first part of the season had Kristina running for mayor of Berkeley, something that was just too far-fetched to really pull viewers in. I was happy to get back to stories about Kristina and Adam dealing with Max’s difficulties at school, because stories centered around Max’s Aspergers have always been that family’s best material. Even when I disagreed with the characters’  behavior – like when Max interrupted Sarah at work, but Kristina was the one who felt wronged – I liked the story.

But then Adam and Kristina responded to Max’s school’s lack of understanding by going “We’ll open up our own school!” and I had to sigh. It’s just so unrealistic. How many parents of a special needs kid have that option? I would have rather seen Adam and Kristina struggle with the harsh reality of uncooperative school administrators.

Kristina’s visit to her old friend/nemesis Bob Little bugged me. The building she wanted for the school already had an offer on it. Instead of moving on, she demanding Bob Little lease it to her. She wasn’t calling in a favor from an old colleague, she was just telling him to do the right thing. Because when is Kristina Braverman ever wrong? It’s exhausting.

The death of Kristina’s friend Gwen resulted in a couple of great performances for Monica Potter. It was really well done. I wish the show had just sat on those emotions for a while, rather than switching gears to “Gwen gave us a bunch of money, we’ll name the school after her, yay!”

One scene I really loved in the finale was Crosby and Joel, having a beer on the stoop after fixing Crosby’s floors, laughing over how insufferably perfect Adam and Kristina can be. That felt like a genuine sibling moment, and I loved how honest it was.

Speaking of Crosby, the poor guy and his family had very little to do this season. Mold in the home? We can do better. I hope he gets something juicier, maybe something career-focused, next season.

This season Joel and Julia had one of their biggest plots ever – a separation. The story had good and bad qualities. In some ways, I respect the pacing – seeing Joel and Julia reunite at the end of the season would have felt false. Seeing just a glimmer of warmth and effort coming from Joel was much better. However, at the beginning of the season Joel’s actions felt so hasty and unlike him, that the cold disconnected dude he’s been all season has felt a little off. I felt the writers wanted Julia to be in the wrong so Joel could leave, but not so in the wrong that we would hate her, or that we wouldn’t be rooting for them to get back together. The result was a little sloppy, and I spent much of the season wondering why Joel wouldn’t even try to work things out for the sake of the family he loves so much.

Joel’s anger of Julia quitting her job, over her inability to let him take a turn as the working parent, those were the valid emotions. I could have done without the question of infidelity – the kiss obviously meant so little, it just made Joel’s reaction seem overblown. I preferred when they focused on the bigger picture.

My concern with this storyline is that we’re heading for a reunion, which will be derailed when Julia has to tell Joel that she slept with someone while they were apart. I hope it doesn’t move in quite so predictable a direction.

In the season finale, Sarah ended up choosing to be with Hank – and overall, I was very happy with Sarah’s stories this season. I liked the doctor she was dating, but I also liked her new focus on a photography career. She wasn’t as flighty this season, you could see how the character had matured. I thought the questions over whether Hank has Aspergers, and how he can overcome whatever communication issues he does have, were really well done. His scenes in the last two episodes with Amber were just plain sweet.

Until one final scene, I had really liked the twist of Ryan returning back to California. He was a mess – had gotten into a drunk driving accident and was given a medicine discharge from the army. His gem of a mother came to get him, and Amber was questioning whether that was really what Ryan wanted. He told her the situation wasn’t for her to fix, and I thought it gave everything a nice sense of closure. Ryan finally realized that Amber couldn’t cure everything for him, and maybe him realizing that would help her move on from him.

And then she went and bought a pregnancy test.

I really, really hope Amber isn’t pregnant. It’s such a cliche – the troubled daughter of a single mother who just can’t escape that fate. Come on! Amber is whip smart, she’s ambitious. Yes, she’s been troubled. She has also gotten amazing SAT scores, worked as an assistant to Kristina, worked at the Luncheonette, and recording backing vocals for a band. I want to see her take night classes, or pursue music – not because I want a happy ending for the character, but because that’s what feels organic for her character. I don’t want Amber to have a baby and be tied to Ryan her entire life, the way her tragic mother was tied to her alcoholic father. Amber has always been too aware of where her own mother’s life went wrong to do that.

Oh, speaking of young female characters on this show, Haddie’s back. Now, I think the show could have used just a few more casual mentions of Haddie over the course of the season. A Skype session or two, the occasional mention of a phone call. Her glaring absence made her storyline in the season finale feel pretty rushed. Haddie returned home from college with a friend, played by the lovely Tavi Gevinson, who is actually her girlfriend. I liked how the show didn’t spell out exactly what Haddie wanted to tell her parents – she didn’t use the words bisexual or lesbian. She just wanted to tell them about this relationship, which was obviously very important to her. But she couldn’t figure out how to do it.

Max spotted something, which tipped Kristina off – and her conversation with Haddie was lovely. I’d forgotten what nice moments those two are capable of having on screen together. Adam figured it out on his own, and that was also handled nicely – silently, as Parenthood often does, and we didn’t need the words.

Victor’s essay at school about fixing the car was a great moment for his family, and Zeek giving the car to Drew was also a really sweet scene. Drew’s love-triangle plot with Amy and Natalie was hit and miss this year – I liked calling back to the abortion, and showing that Amy was now having a hard time with that and with being away from home. I didn’t love Drew sulking over his crush sleeping with his gross roommate.

The episode ended with a classic Braverman family outdoor dinner, now held at Adam and Kristina’s house. After a season of deliberations, Zeek and Camille sold their home and moved into a smaller place. At times that storyline felt like it was being stalled so that we could have this scene to close out the season – but it was a nice way to end things.

What did you guys think of the season finale? Also, if you haven’t read it yet, my sister wrote a great piece on Parenthood for my blog, which you can find here.