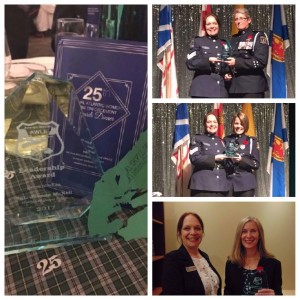 “I would like to extend sincere congratulations to these three officers,” said AWLE President, Sgt. Carolyn Nichols. “These women exhibit exemplary behaviour, and we salute them for their dedication to policing, public safety and community.”

Sgt. Rudback received the AWLE’s Medal of Valour Award, which is awarded to an officer for going above and beyond the call of duty. Earlier this year, while on vacation, Sgt. Rudback was instrumental in saving a fellow traveller’s life at the Toronto Pearson International Airport. A woman, who had fallen and hit her head on the concrete floor, required medical assistance. Sgt. Rudback noted signs of cardiac arrest and went directly to the woman and began CPR. Once U.S. immigration officers arrived with an AED, Sgt. Rudback and the officers worked together to revive the woman before handing over her care to arriving firefighters and paramedics. Sgt. Rudback was instrumental in saving this woman’s life. A 28-year veteran with HRP, this is just one situation highlighting what a responsible, caring and humble individual Sgt. Rudback is.

Sgt. McNeil received the Leadership Award, which is awarded to an officer who exhibits superior leadership skills that make a significant contribution within the agency. Since 2001, Sgt. McNeil has been a member of HRP, and recently she became the Sergeant in charge of the Community Relations Crime Prevention Unit (CRCP). Sgt. McNeil demonstrates full engagement in her duties and responsibilities to her team. Her professionalism is paralleled by her passion for policing. As a mentor, she understands that establishing strong and healthy relationships will always build pride, loyalty and professionalism inside and outside HRP. She received accolades from across HRP for her compassionate and common-sense approach to supporting employee mental wellness. She recently self-nominated to become an instructor of the Road to Mental Readiness training (R2MR), which takes incredible tact, directness and genuine humanity. She is a shining example of hope to other women officers seeking a leadership role in law enforcement.
Detective/Constable Nielsen received the Excellence in Performance Award, which is awarded to an officer for their outstanding investigative efforts. D/Cst. Neilsen investigated multiple unsolved homicides where charges were laid and suspects convicted because of her attention to detail and determination. In 2013, she was assigned an unsolved homicide, which was a very difficult and time consuming investigation. Countless hours were spent both at work and at home investigating. Over a six-month period, investigators gathered enough evidence to charge the two suspects with first degree murder. As the lead investigator, D/Cst. Nielsen has gone above and beyond investigating these crimes. She’s truly an amazing investigator who is determined and motivated to obtain justice for the victims’ families.

“We congratulate Sgts. Rudback and McNeil and D/Cst. Nielsen on their prestigious awards,” said Chief Jean-Michel Blais. “Each one is a model officer who is respected by peers and community members alike. We’re extremely proud that they’ve been recognized for their contributions to policing.”

Established in 1992, AWLE is an organization founded on the desire to work together equally and inclusively to achieve excellence in policing for all members. AWLE has been a network of women in law enforcement committed to the facilitation of the development and growth of the membership in the Atlantic Region.